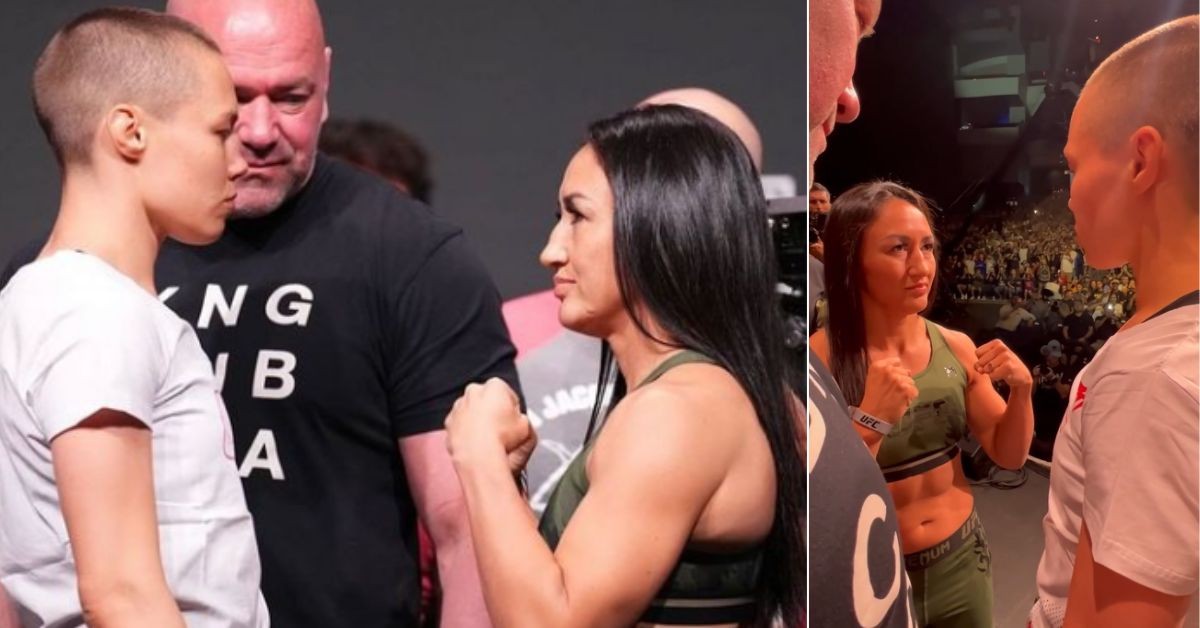 Rose Namajunas vs Carla Esparza face-off ahead of UFC 274

Rose Namajunas returns to action to defend her UFC Strawweight Championship in her second title defense against her former rival in a rematch at UFC 274. Both the women mixed martial artists will co-main the UFC PPV inside Footprint Center in Phoenix, Arizona.

Carla Esparza is riding on an impressive five-fight winning streak with notable wins over the likes of Marina Rodriguez and Alexa Grasso. Esparza’s last loss came against Tatiana Suarez in a vicious ground and pound stoppage back at UFC 228. With 24 UFC outings under her name, she is a veteran of the sport and the first UFC Strawweight Champion of the world.

Meanwhile, Rose Namajunas’s evolution as a mixed martial artist is the prime reason through which she has already cemented her legacy to a huge extent in the world of women’s mixed martial arts at just 29 years of age.

Namajunas poses more threats for Carla Esparza at UFC 274. The reigning strawweight champion has shown massive improvements in both her striking and wrestling performances since losing the strawweight title to Jessica Andrade back at UFC 237. While the experience of fighting favors Carla Esparza, Namajunas takes the lead in performing at the highest level in major UFC PPVs.

While there’s no doubting a fighter’s mindset, Esparza will be competing for the UFC gold for the first time in almost seven years. Her Championship reign was also short-lived, after dropping the Strawweight Championship in her first title defense. There’s a lot at stake for Carla Esparza to gain with a win over Rose Namajunas, and the overwhelmingness of it all could certainly affect the former Champion.

Rose Namajunas is just more talented than the rest of the division, and while there’s tough competition to her fighting style, Namajunas’ display of grappling in her last title defense shows how the defending Champion wouldn’t mind taking the fight to the ground if she thinks she is not able to execute better on the feet. And that’s speaking of her all-around skill-set which certain precedes Esparza’s strong suit.

However, Esparza is still someone to worry about. Having triumphed over the likes of Marina Rodriguez, Alexa Grasso, and Michelle Waterson among others, Carla Esparza has shown that she can neutralize some of the best strikers in the division to dictate the fight on her own terms.

Esparza is tough, however, it wouldn’t be something a fighter would want to go in with when you are fighting Rose Namajunas. If Esparza can tear through the offense to get those takedowns, there’s a chance she could beat her on the scorecard. But we see no way of that happening as often as it might take Esparza to get her hand raised.

Additionally, Namajunas’ striking, and her ability to mix it up will prove to be too much for Carla Esparza come UFC 274. There’s a lot at stake for both the fighters, with Namajunas looking to defend her gold and avenge her loss, and meanwhile, Esparza on the brink of a UFC story that will be remembered for years to come.

Rose Namajunas is likely to get her hand raised and it could come with a stoppage win over former rival Carla Esparza. However, it will be easier said than done for the defending Champion who will definitely be tested.