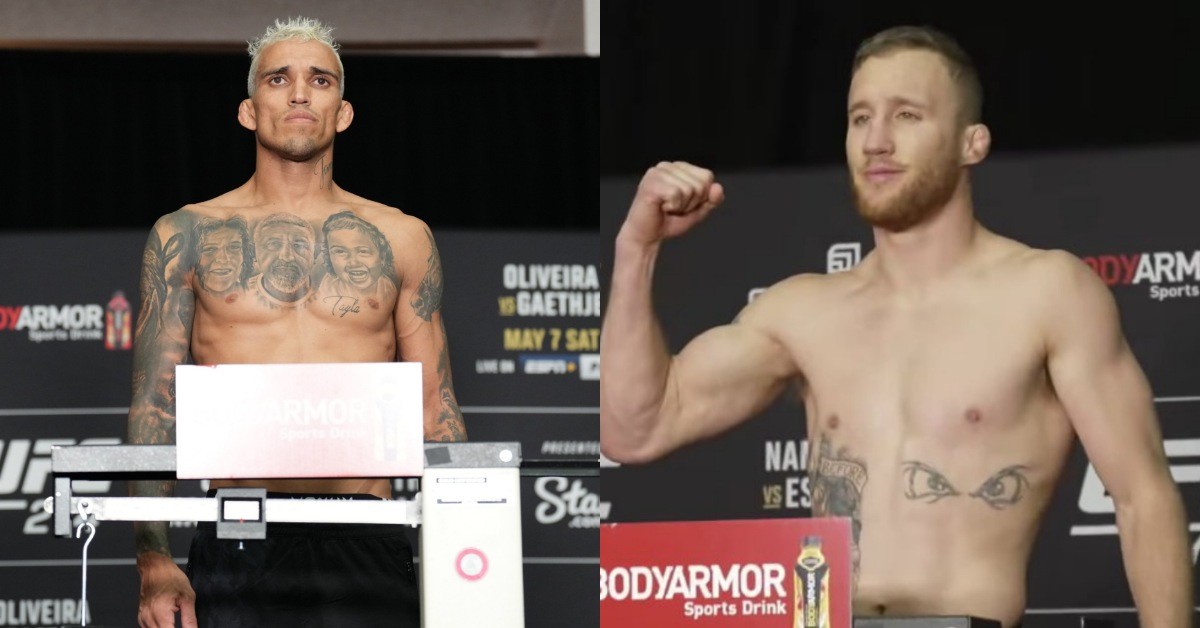 Charles Oliveira and Justin Gaethje weigh in for UFC 274. (Images via Twitter)

The event will also feature the UFC Strawweight Champion Rose Namajunas defending her belt against Carla Esparza in the co-main event. Both Rose and Esparza have also weighed in at 115lbs. With both fighters making weight, the rematch of the 2014 fight is official for UFC 274.

In another significant fight lightweight, both Tony Ferguson and Michael Chandler weighed in within the allowed limit of 156lbs for the non-title fights. While Tony came in at 155.5lbs, Chandler stepped on the scale at 156lbs. Donald Cerrone also weighed in under the allowed weight at 155.5lbs.

Norma Dumont also missed weight as she weighed in at 146.5lbs for her featherweight bout against Macy Chiasson. Hence she will have to forfeit 30% of her fight purse.

Is Charles Oliveira in trouble ahead of UFC 274?

Although it seemed as if it was a mishap with the scales, Charles Oliveira still missed weight. None of the other fighters had any issues with their weigh-ins. Hence, the question becomes whether the fans should be worried about Charles Oliveira or not. Do Bronx previously missed weight multiple times before in the UFC. So him missing weight for a title fight does not bode well for him.

FIghters often deflate themselves to make weight and it compromises their ability to take a shot. Oliveira is fighting Justin Gaethje who is one of the hardest punchers in the UFC. Hence Oliveira’s initial weight miss is not a good sign for the champion. Although he made the wight later, it still creates some doubts on whether he will be able to hydrate himself in time for the event this weekend. Charles was dropped in both of his last fights against Dustin Poirier and Michael Chandler. Can he survive Gaethje’s power on Saturday? Only time will tell.

UFC Strips Charles Oliveira of Title After He Misses Weight by 0.5 Lbs, New Rules Are Set for Gaethje vs Oliveira