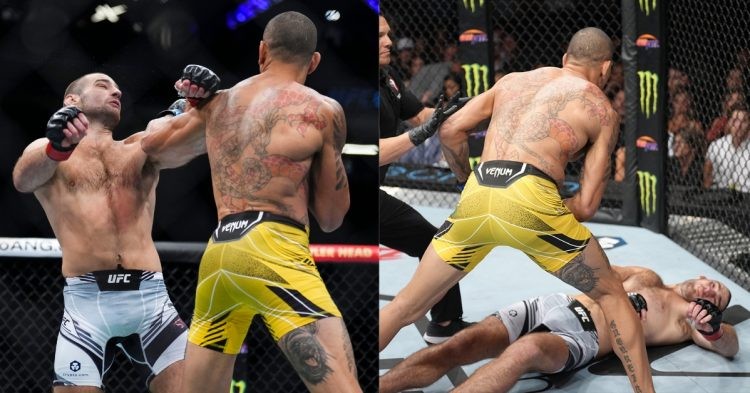 Sean Strickland made his return inside the octagon as he took on Alex Pereira in a three round bout on the main card of UFC 276. Going into the fight, Strickland was coming off a unanimous decision win over Jack Hermansson.

Currently #4 in the middleweight division, Sean Strickland was on a six-fight win streak. Meanwhile, Alex Pereira who was just two fights into the UFC made a quick rise after winning two fights in a row. There was a lot at stake for both the middleweight’s as the winner would become the number one contender for the title.

Alex Pereira showed why he is one of the most hyped fighters in the division as he landed a brutal hook to knockout Sean Strickland in the first round of the fight. With this win, The Brazilian middleweight ended the six-fight win streak of Strickland and picked up his third straight win.

ALEX PEREIRA HAS DYNAMITE IN HIS LEFT HAND pic.twitter.com/g3icS9PcIH

Getting into the details of how the fight played out, Sean Strickland tried to walk down on Pereira early in the first round. However, Paotan countered with some good calf kicks and straight body shots. Strickland entered into dangerous territory and didn’t maintain safe distance and Pereira took full advantage and finished the American middleweight with a beautiful left hook and a combination of punches.

Alex Pereira delivered to his hype as he knocked out Sean Strickland in the first round. This is a big win for the Brazilian middleweight as Strickland was #4 in the division and he will jump to that spot once the rankings update on Monday.

It is needless to say that fight fans and fighters around the world were in awe after watching Alex Pereira finish Sean in the first round. So let us take a look at some of the twitter reactions.

Alex Pereira is the real deal.. the POWER!! Wanna see him against Izzy in mma now 👀#ufc276

I think I can speak for all fans when I say how bad we wanted to hear a Sean Strickland press conference for a title because he’s so nuts. Won’t get to see it tho bc he’s so nuts that he decided to stand right in front of Alex Perriera

This guy must have sledgehammers for fists! That was INSANE!! #UFC276

It definitely would be exciting to watch a third battle between Israel Adesanya and Aled Pereira if the middleweight champion manages to defend his title against Jared Cannonier later. It is safe to say that Alex Pereira put on a special performance and has blitzed his way through the competition.