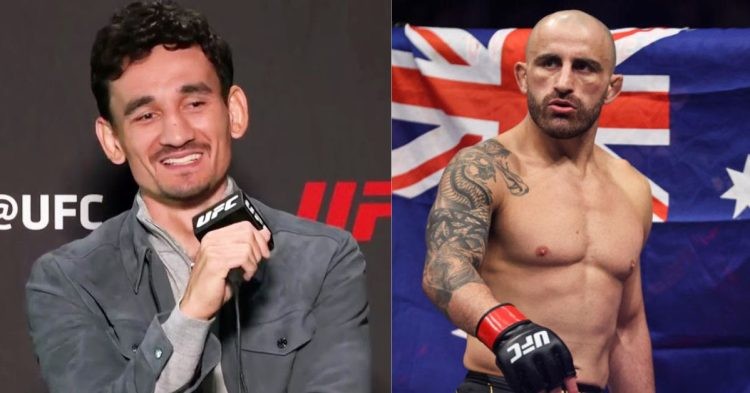 Max Holloway is all set to get back in action this weekend on July 2nd as he takes on his arch-rival Alexander Volkanovski in a trilogy bout in the co-main event of UFC 276. There will be a lot at stake as the featherweight title will be on the line as these two rivals collide against each other for the third time.

It is needless to say that Blessed will be looking for revenge as he fell short on both occasions previously against the Aussie. However, Holloway’s resurgence after losing the title fight rematch against Volkanovski has been commendable because he has outclassed top fighters like Calvin Kattar and Yair Rodriguez in a dominant fashion.

Consequently, he has earned this title shot once again. As we are just a few days away from this classic trilogy fight between Alexander The Great and Blessed, Holloway sat down for an interview at the official UFC 276 weigh in show. This show featured Dustin Poirier as a guest interviewer alongside hosts Daniel Cormier and Laura Sanko.

During this conversation, The Diamond asked Holloway whether he has found any weaknesses of Volkanovski that he plans to exploit at UFC 276 after fighting ten rounds with him. Without getting into the specific details, Max hinted that he has found the ultimate kryptonite of the featherweight champion and everyone will have to wait until the bell rings on July 2nd.

Max Holloway and Alexander Volkanovski have battled it out inside the octagon for ten rounds of intense action. But both the fights have gone to the distance with Volkanovski winning the first fight via unanimous decision and the rematch ending in the Aussie’s favour by split decision.

The results of both the fights are deemed highly controversial as many fans believe Blessed was the clear winner in the second fight in 2020. With Holloway regaining his spot as the number one contender and earning a title shot against Volkanovski, he has no plans of leaving the trilogy’s outcome to the judges.

Max Holloway is confident that he will put away Alexander Volkanovski for good and become the new UFC featherweight champion. It looks like the Blessed has found something in his training camp as he promises to exploit that weakness and avenge his two losses.

Just like Holloway, Volkanovski also believes that this fight won’t go the distance. So it would be highly exciting to watch this trilogy fight, as both these fighters will go for the kill.

“Your Leg Injury Get Better So Quickly” – After Beating Serena Williams, Harmony Tan Is Criticised by Her Doubles Partner