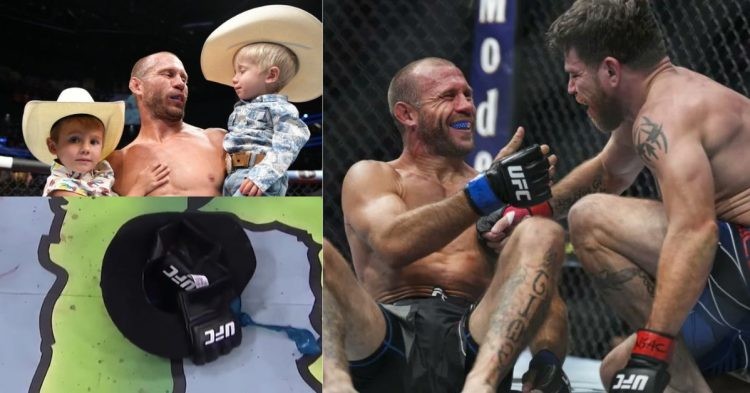 What a career it has been for Donald Cerrone 👏 #UFC276 pic.twitter.com/TdDjUU5cmO

Cerrone stepped inside the cage with fellow veteran Jim Miller as both the fighters shared the Octagon in a fight to hold the record for most UFC wins. While Cerrone had an incredible start to the fight, the Cowboy paid the price during an exchange in the first minute of the second round.

Both the fighters connected a high kick and landed on the canvas. However, Miller was quick enough to secure his position and snatch a guillotine choke to get the victory. In the process, he etched his name as the fighter with the most UFC wins to his name.

The last ride of an iconic career. Thank you @CowboyCerrone 👏🤠 pic.twitter.com/LEF6Lnea6i

Following the fight, much to the surprise of fight fans around the world, Donald Cerrone announced his retirement from the sport.

“I don’t love it anymore Joe. It’s hard for me to get up and this is the longest camp I’ve had in a long time and I’m not complaining or anything. I just don’t love it anymore. I’m going to go be a movie star baby! It’s time to bow out.” Cerrone said in the post-fight Octagon interview.

Donald Cerrone will go down in the UFC Hall of Fame

Donald Cerrone has certainly had a career that will go down in the UFC’s Hall of Fame. The former lightweight title challenger bows out after spending more than a decade as a professional mixed martial artist.

Donald Cerrone made his mixed martial arts debut back in February of 2006. Having fought the who’s who of MMA, there’s no denying Cerrone’s greatness. He retired with a record of 36 wins, 17 losses, and 2 no-contest on his MMA resume.

It’s been a honor Donald Cerrone you the man 🙏

Congratulations @Cowboycerrone on an amazing career, thank you for all of the great fights. #Legend

The MMA community paid its respect to Donald Cerrone, and the messages continue to come Cerrone’s way as fans look back at the legacy that the Cowboy has left inside the Octagon.