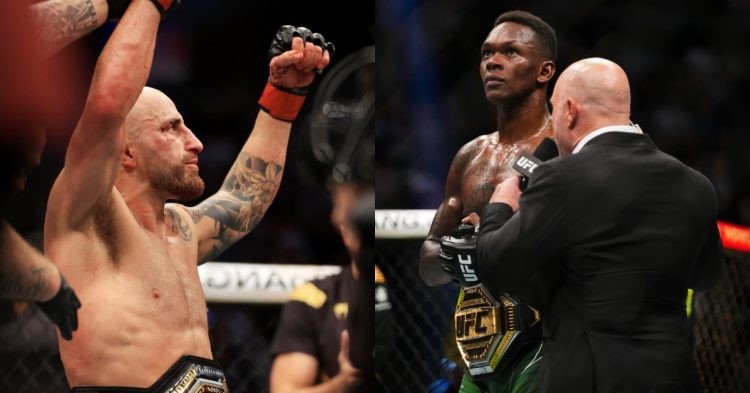 Alexander Volkanovski and Israel Adesanya at UFC 276. (Images via Twitter)

The Pay Per View (PPV) buy rate for UFC 276 is finally out and it does not look very good. The event featured two big fights at the top of the bill. UFC Middleweight Champion Israel Adesanya took on Jared Cannonier in the main event. Whereas the trilogy fight between Max Holloway and Alexander Volkanovski was featured in the co-main event of the evening.

But not only that, stars such as Sean O’Malley, Robbie Lawler and Sean Strickland were also featured on the main card of the night. However, the PPV as a whole failed to deliver. Both headliners went to the judges’ card and the O’Malley bout against Pedro Munhoz ended in a no-contest due to an eye poke. But it did feature an absolute banger between Lawler and Barberena.

Ultimately, it was not enough to generate even half a million PPV buys. A report from SportsZion revealed that the event generated around $400,000 buys. The report also suggests that Israel’s UFC 271 rematch against Robert Whittaker apparently sold 600,000 PPVs in February earlier this year. A drop-off of almost 200,000 PPVs does not reflect nicely on Adesanya’s resume.

UFC has struggled with their PPV sales all year long. They had record-setting PPV sales numbers last year in 2021. But it also included multiple appearances from the likes of Conor McGregor, Dustin Poirier and Jorge Masvidal. But there has not been a huge fight this year. Hence, the low PPV sale numbers are completely understandable. As for UFC 276, multiple factors may have dampened the numbers.

Israel Adesanya is a great champion who has a massive fan following. But he has not been the most exciting fighter to watch lately. Out of his 5 title defences, 4 of them went to the judges’ card. All four of those fights were not particularly entertaining either. Hence, it has taken a bit of a toll on Adesanya’s marketability. Plus, neither Alexander Volkanovski nor Max Holloway is a big PPV star.

A message from the champ 🗣 #UFC276 pic.twitter.com/MbCpawHN76

Adesanya’s opponent for the event, Jared Cannonier is also not a main event calibre star. Hence, Izzy did not have a decent B-side to rely on to boost the PPV sales. But business will definitely pick up once he fights Alex Pereira. They have a history together and the fight has been almost 5 years in the making. Hence this event can be perceived as a slight bump in the road.