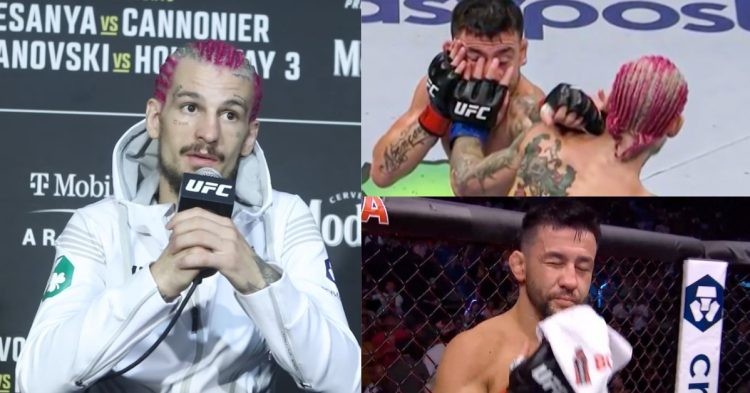 Sean O’Malley stepped inside the octagon to kick off the UFC 276 main card against Pedro Munhoz in a three-round bout that took place at the T-Mobile Arena in Las Vegas. Consequently, fireworks were expected from this matchup as both the bantamweights have great punching power and striking skills.

The fight started slowly with Pedro Munhoz landing some good calf kicks. O’Malley did well to check most of those leg kicks and countered by using his reach to land some quick jabs. Just as the fight was getting heated up in the second round, an unintentional eye poke from Suga Show resulted in an anti-climatic no contest.

To the disappointment of fans present in the arena who were expecting an epic showdown, Pedro could not recover and the referee decided to stop the fight. After the fight, Sean O’Malley sat down for a post-fight press conference and shared his thoughts on how the fight ended.

O’Malley also trashed the two judges for scoring the first round in favour of Pedro Munhoz. He was extremely surprised by the scoring as he believed that he dominated the entire fight.

Two of the three judges scored the first round for Pedro Munhoz against Sean O’Malley. #UFC276 pic.twitter.com/9Qqda03CIL

“For those judges to say that’s a score for him they’re completely stupid. Literally stupid. I was winning the fight. I can’t believe these judges. I literally didn’t get hit. What were they watching? I didn’t get hit how could you score that. That makes zero sense.”

Will Sean O’Malley face Pedro Munhoz in a rematch next?

Sean O’Malley felt that Pedro Munhoz took the easy way out after not continuing to fight after the eye poke. Suga Show was expecting Pedro to resume fighting after twenty seconds. So when the interviewer asked O’Malley whether he would fight Munhoz in a rematch, the bantamweight star was hesitant.

“In the cage he said we can run it back. Someone do a poll on Twitter and see if he looking for a way out. I really believe that was best-case scenario for Pedro. I was piecing him up, I was way faster than him. He couldn’t hit me, couldn’t hurt me. I don’t know.”

Looking at Sean O’Malley’s response, we might not see these two bantamweight’s fighting each other in a rematch anytime soon. In the build up of his UFC 276 fight, Suga Show had shown interest to fight Petr Yan. The Russian also seemed to be keen on fighting O’Malley.

It would be interesting to see what’s next for the rising bantamweight star after the fight ended in a disappointing fashion.