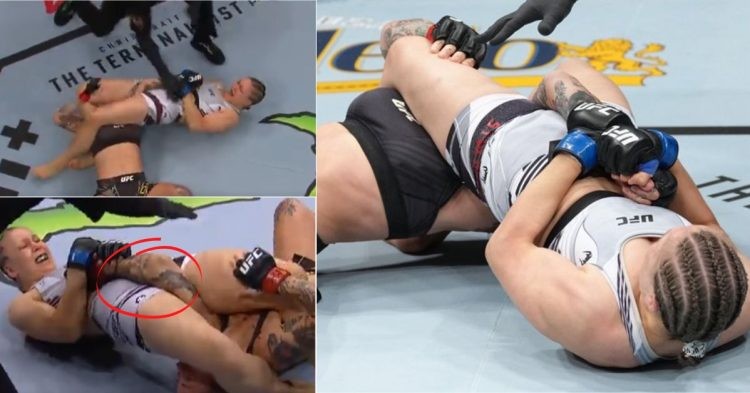 UFC 276 kicked off to a horrific start to say nonetheless as Julija Stoliarenko dislocated Jessica-Rose Clark‘s arm with a vicious armbar to pick up the victory.

Nothing sweeter than your first UFC victory 👏

Julija Stoliarenko with a slick and quick finish in R1!

The victory marked the first-ever win for Julija Stoliarenko inside the UFC Octagon. The last time she tasted a win inside the cage was during The Ultimate Fighter.

“Oops, I did it again!” Julija said in the post-fight Octagon interview.

For Jessica-Rose Clark, it was her second straight submission loss. Both the setbacks have come via way of an arm-bar.

It won’t be wrong to say that Jessica-Rose Clark stands at the peril of being released from her UFC contract if we look at her past two performances.

Clark is now 2-4 in her last six fights and will look to bounce back the next time she steps inside the cage. Needless to say, looking at her past two losses, it seems like she has a lot of adjustments to make in her fight game.

Several UFC fighters reacted to the brutal finish, and their tweet says it all.

Crazy fast armbar finish! 🔥 what a way to start the night #UFC276

However, it was a great start to the first round for Clark, who clipped Stoliarenko. Be that as it may, Stoliarenko switched things up with a takedown and followed it immaculately with an impressive armbar to seal the deal.

It was a do-or-die situation for Julija Stoliarenko, after losing her first three bouts inside the UFC Octagon. She should find a resurgence in her career with a spectacular victory to kick off probably the most exciting UFC card of this year.