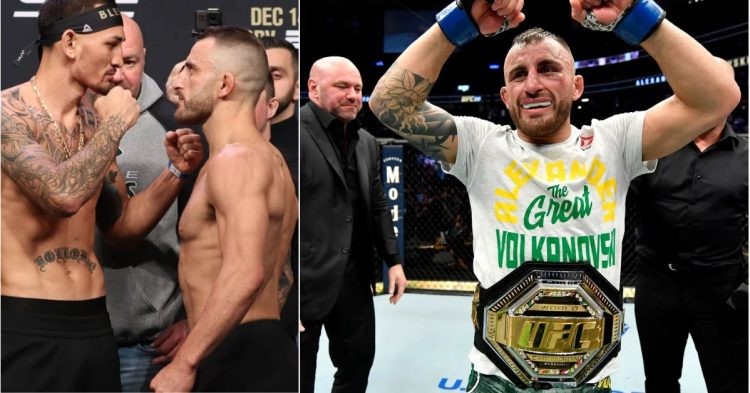 Alexander Volkanovski and Max Holloway will share the UFC Octagon in a trilogy fight for the UFC’s featherweight championship in the co-main event of UFC 276. In what promises to be a match-up of epic proportions, a lot is at stake for both the fighters going into this championship fight.

Despite back-to-back wins over Holloway, Volkanovski still has to prove he is the best featherweight on the planet owing to how close the last two fights have been. On the other hand, Max Holloway has his legacy at stake after seemingly cementing his position as the greatest featherweight of all time.

Ahead of the UFC 276, let’s try to predict the winner of Alexander Volkanovski vs Max Holloway set to go down in the co-main event this weekend.

Can Alexander Volkanovski beat Max Holloway in the trilogy fight at UFC 276?

Alexander Volkanovski continues to prove why he is arguably the greatest featherweight of all time. With multiple wins over Max Holloway and dominant outings against both Brian Ortega and Chan Sung Jung, the Australian fighter will settle for nothing less than to put the Holloway rivalry behind him with a dominant victory against the former featherweight champ.

Volkanovski remains undefeated inside the UFC Octagon, and with a lot on his shoulders considering how the last two fights played out in the eyes of fight fans around the world, it goes without saying that Volkanovski’s motivation and mindset going into UFC 276 will be next to none.

On the other hand, Max Holloway has a legacy to save and stands the threat of going down as the second-best featherweight of all time.

As a match-up, it favors Volkanovski owing to his wrestling pedigree. However, that’s not all. It is Holloway’s grit and toughness that could also put him into a lot of trouble against someone like Volkanovski, who doesn’t mind getting the better of his opponent on the judge’s scorecard. At the end of the day, a win is a win.

Max Holloway should know how to beat Alexander Volkanovski by now

Sharing the Octagon against someone twice in a row for ten straight rounds isn’t something you see regularly in the world of MMA. On top of that, both the fights have been razor-sharp close, with Volkanovski getting the edge on both occasions.

Volkanovski‘s ability to mix it up with wrestling in the first round, and then use leg kicks to his advantage in the rematch could once again be the weapon to hand Holloway another loss.

While Holloway looked incredibly dangerous in his last fight against Yair Rodriguez, once again failed to check the leg kicks, and was nowhere close to being unhittable compared to how Volkanovski has been in his last two fights.

While the pressure did help Holloway negate the reach difference against both the featherweights, it did not happen without the former champion absorbing a lot of damage himself.

Be that as it may if the granite chin stands and Holloway decides to pressure Volkanovski by engaging him in a battle of mixed martial arts; not a striking exchange; there’s a huge possibility the featherweight champion can reclaim his crown once again.

While it is easier said than done, from what we have seen from Holloway in his fight against Calvin Kattar and Yair Rodriguez, a couple of adjustments and we think Max Holloway gets the job done this weekend at UFC 276.