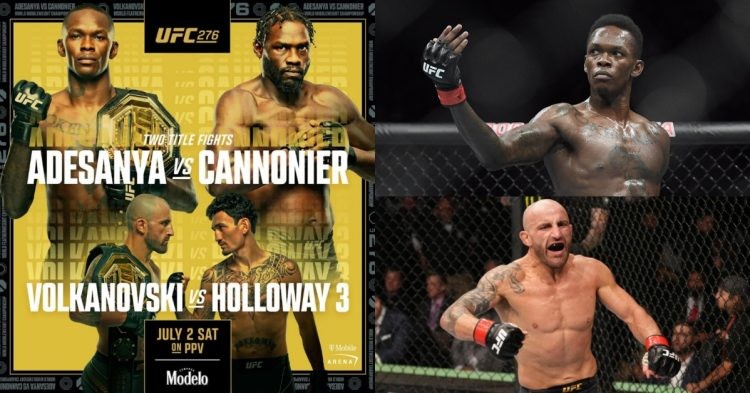 This year’s international fight week card, UFC 276 will go down on July 2nd in Las Vegas, Nevada. Middleweight champion Israel Adesanya will take on Jared Cannonier in the main event of the night. But that is only one of two title fights on the card. Featherweight champion Alexander Volkanovski will defend his belt against Max Holloway in the co-main event of the night.

Kickboxing sensation Alex Pereira will take on Sean Strickland in the main card. The winner of that contest is set to be in line to fight the winner of the winner between Izzy and Cannonier. Former UFC Welterweight champion Robbie Lawler will also feature on the main card where he fights Bryan Barberena.

But perhaps the most anticipated bout of the night will take place between rising superstar Sean O’Malley and Pedro Munhoz in the bantamweight division. It will open the main card of the event.

Much like the main card, the prelims are also filled with bouts that can be potential show stoppers. The bouts on the card will be available for free on all the ESPN platforms and the major TV network ABC.

Brad Riddell will headline the prelims portion of the event alongside Jalin Turner. ‘Cowboy’ Donald Cerrone will also also be a fixture on the card as he takes on Jim Miller in a clash of veterans.

Irish welterweight prospect Ian Garry will be going up against Gabe Green on the prelims as well. In the early prelims, Uriah Hall is scheduled to fight Andre Muniz and Maycee Barber will fight Jessica Eye. The very first contest of the night will take place between Jessica-Rose Clark and Julija Stoliarenko.

Israel Adesanya vs Jared Cannonier (Middleweight championship fight): Israel Adesanya is perhaps walking into the biggest challenge of his career. Although Jared Cannonier does not bring anything to the table that Izzy has not seen before, Jared’s focus and determination set him apart from all of his previous opponents in the UFC.

Cannonier is a strongly built wrestler with amazing ground and pound skills. He is also extremely durable as evident by his bouts against Robert Whittaker and Derek Brunson. But that ultimately may not be enough he goes up against one of the greatest 185lbs fighters to ever fight inside the Octagon.

Adesanya’s striking was already on a completely different level than the rest of the division, but he has also shown a great improvement in his takedown defence lately as well. Barring a major upset, fans can expect the current champ to retain his title by the end of the night. But it has to be said that the fans have witnessed a lot of shocking results lately. Hence, Cannonier’s chances can not be ruled out either.

Alexander Volkanovski vs Max Holloway (Featherweight championship fight): After two epic fights, Volkanovski and Holloway will finally step inside the Octagon to settle the debate once and for all. There is a vast majority of fans who believe that Max Holloway was the rightful winner in both of their previous fights. Hence, Alex needs to win the bout to solidify his status as the true champion.

Since their last contest, both Max and Alex have won two fights each. While Max has beaten Calvin Kattar and Yair Rodriguez. Volkanovski dominated Brian Ortega and The Korean Zombie. Both fighters have looked excellent during their last trips to the Octagon. So the question rises, will there be a decisive winner this Saturday?

Although the 30-year-old former champ has had moments of brilliance against the Aussie champ, Volkanovski has always found a way to beat Holloway. Hence, it will be hard to pick against the 33-year-old champ.

Sean Strickland vs Alex Pereira: With the spot of the no.1 title contender on the line, both Sean Strickland and Alex Pereira will give it their all to earn it. Although Alex has more power and more sophisticated striking, Sean Strickland is a more compact MMA fighter. Hence the advantage lies with Tarzan in this fight.

Robbie Lawler vs Bryan Barberena: The bout was originally scheduled for the prelims. But it will now be on the main card and what an exciting fight this is! Both Barberena and Lawler are insanely skilled strikers. Hence, the fans can expect an entertaining brawl between them. Judging by recent form, Barberena will be the smart pick for the fight.

Pedro Munhoz vs Sean O’Malley: This bout can be dubbed as the people’s main event. There is no doubt that Sean O’Malley’s stock is at an all-time high now. With Pedro losing both of his last two fights, Sugar Sean will be the favourite to get the job done on Saturday.

Joe Rogan Claims Alex Pereira Made Glover Teixeira a “Straight up Assassin”, Warns the UFC Middleweights of the Kickboxing Legend