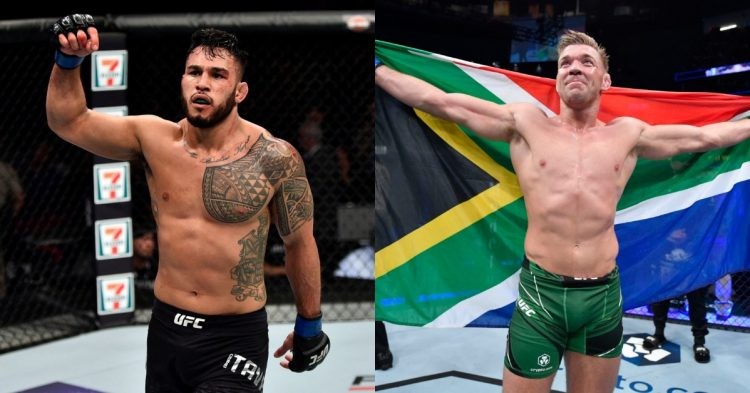 Brad Tavares vs Dricus Du Plessis is set to take place this weekend at UFC 276. The fight takes place in the middleweight division and it will be a part of the prelims portion of the event this Saturday. Both Tavares and Du Plessis are coming off 2 consecutive wins.

Fighting out of Las Vegas Nevada, Brad Tavares is a veteran of the UFC. He first came into the UFC over 12 years ago. Tavares beat Seth Baczynski in the Ultimate Fighter season 11 finale. Although Brad has 14 wins in his UFC career so far, he has never been able to beat the elite of the division.

Among his 6 UFC defeats, Tavares has lost to the current champ Israel Adesanya, former middleweight king Robert Whittaker and title contenders such as Yoel Romero. The 34-year-old has always been a gatekeeper for the elite fighters. Hence, a win over him will solidify Dricus Du Plessis as a legit prospect in the division.

After amassing a record of 14-2, Dricus Du Plessis made his UFC debut on October 10th, 2020. After defeating Markus Perez on his debut, Du Plessis took a big jump in competition. The South African fighter went up against Trevin Giles at UFC 264. He has beaten both of his opponents so far via knockout.

Nicknamed ‘Stillknocks,’ Dricus Du Plessis is an agressive striker who looks for a finish from the get-go. It is evident by his striking stats in the UFC so far. Dricus lands 5.07 strikes per minute. However, he is very good about maintaining his distance. The 28-year-old only absorbs 2.39 strikes per minute.

In his second bout against Trevin Giles, Dricus landed two takedowns. But Du Plessis is yet to be taken down in the UFC. His opponent on July 2nd, Brad Tavares is not a dominant wrestler who aggressively chases a takedown. Although he landed 11 takedowns in his first 5 fights, Brad has only managed 2 in his last 5.

Hence, the fans expect a stand up battle between Tavares and Du Plessis this weekend. Tavares averages 3.18 strikes per minute while absorbing 2.76 strikes per minute. As a result, Dricus may find the opportunity to crowd Brad with strikes and get an early finish. He has a 100% finishing rate with 7 knockouts and 9 submission wins.