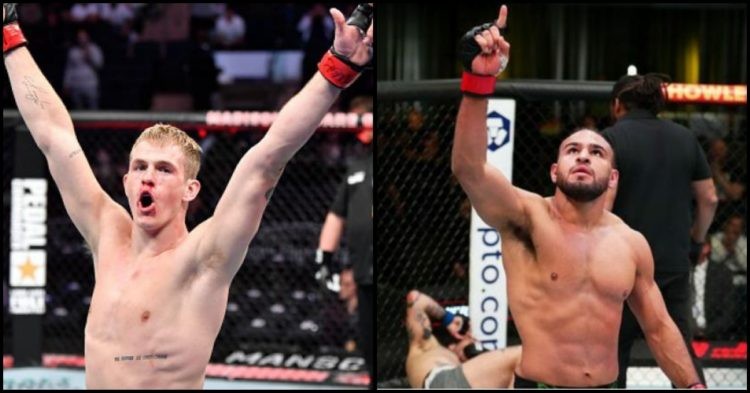 Ian Garry vs Gabe Green at UFC 276. (Images via Twitter)

Undefeated Irish fighter Ian Garry is back in action this weekend. He is set to fight Gabe Green in the prelims of UFC 276 this Saturday. While neither Garry nor Green currently features in the rankings, a win on Saturday will bring them much closer to getting a number behind their names.

Ian Garry made his UFC debut in November of 2021. He was a heavy favourite heading into the bout against Jordan Williams and Garry did not disappoint. Ian stopped Williams in round 1 with only 1 second left in the clock. Although he could not replicate the same dominance against Darian Weeks, Ian still got a unanimous decision victory at UFC 273.

Nicknamed ‘Gifted,’ Gabe Green fights out of Downey, California. After six back-to-back wins in the span of a year, Green came into the UFC in 2020. But he lost the fight to Daniel Rodriguez via a unanimous decision. However, Gabe has turned his career around with 2 wins over Philip Rowe and Yohan Lainesse. He beat the latter via stoppage.

What makes Ian Garry so good?

Heading into this contest on Saturday, Ian Garry is a moderate favourite. Ian is a -175 favourite while Gabe is a +150 underdog. It goes to show how well-matched the fighters are in terms of skills. Let’s take a look at the stats and break down how the fight may play out.

Although the sample size is very small, Ian Garry has been really impressive inside the Octagon so far. The future has a very good striking game as he lands 4.60 strikes per minute. But the 24-year-old does have a slightly higher percentage of getting hit with an absorption rate of 3.10 strikes per round.

Garry also has a good wrestling defence. His takedown defence rate is currently at 75%. Although Ian was taken down by Darian Weeks in the second fight, Weeks only had a control time of 2 minutes and 52 seconds. Ian is slowly turning into more of a compact fighter. So far, Garry has managed 5 knockout victories and 1 win via submission.

Can Gabe Green cause an upset at UFC 276?

Ian is a very pragmatic fighter who tries to avoid getting into a brawl. But his opponent this Saturday is completely the opposite. Gabe Green lands 6.28 strikes per minute while absorbing 6.61 strikes in the same period. It almost cost him the last fight against Yohan Lainesse. Yohan knocked Green down in the second round.

However, he managed to survive and then knocked Lainesse out with vicious ground and pound.

Green has only attempted 2 takedowns in UFC so far and he got both of them. Hence he has a 100% takedown accuracy. But Gabe’s takedown defence stands at 54% and he has been taken down 5 times so far in the UFC. But the style has worked for him so far as he has secured 6 submissions in his career so far and has knocked out 4 of his opponents.

If Gabe Green continues to leave himself open to getting hit, Ian Garry will light him up on the feet. The Irishman is much better with his timing and selection of strikes. He also possesses more power behind his strikes. As a result, focusing on grappling will be the wise thing to do for Gabe. He may not be able to secure a submission, but the 29-year-old can use his superior grappling to outpoint the prospect.