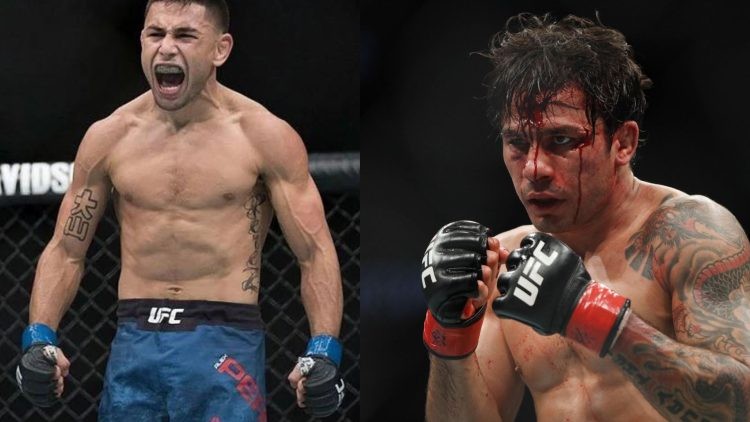 UFC 277 features an exciting flyweight contest between Alexandre Pantoja and Alex Perez. Both are two top-ranked UFC flyweights with lots of experience. While Pantoja is ranked number 4 Perez sits at number 6 in the flyweight division.

In the co-main event of UFC 277, Brandon Moreno takes on Kai Kara France in a rematch with the interim flyweight title on the line. And it will be a huge opportunity for both Pantoja and Perez to secure a victory and the number one contender spot .

This fight will be a crucial one for Pantoja, who is on a two fight winning streak. His last loss came against Askar Askarov and that was a close fight. Since then Pantoja has beaten Manel Kape and Brandon Royval.

On the other hand, Alex Perez is making an octagon return after a long layoff. His last fight was against the Deiveson Figueiredo, where he lost the fight by an early submission. Can he get back on the winning streak at UFC 277? Or will it be Alexandre Pantoja securing one more win and aiming for a title shot next?

Pantoja is a huge favorite against Alex Perez and rightfully so. The biggest factor in this fight is going to be Alex Perez’s inactivity, who is making his return after his last fight in Novembe rof 2020.

Even if we match the resume of both the flyweights, Pantoja comes out as the better fighter. He has wins over Brandon Royval and Manel Kape in his last two fights. He also has a win over the former UFC flyweight champion, Brandon Moreno.

Besides that, his last two losses against Askar Askarov and Deiveson Figueiredo were two close fights. And Pantoja has made a lot of improvement since those losses.

It’s very unlikely that this fight is going to end with a finish. But, it’s hard to imagine a scenario where Alex perez comes back after such a long layoff and beats someone as good as Alexandre Pantoja.