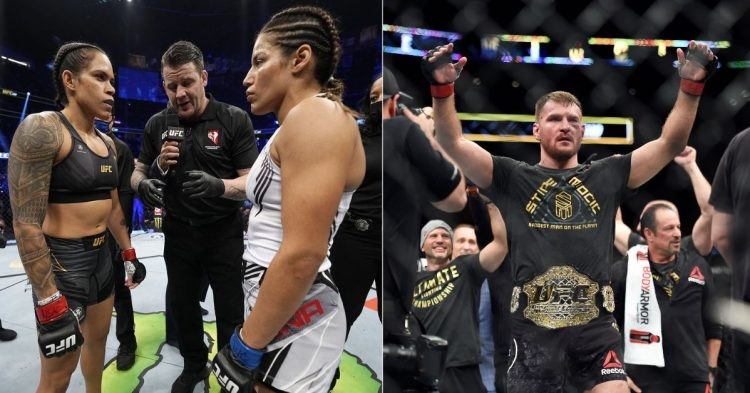 Amanda Nunes will look to reclaim her lost gold as she takes on Julianna Pena in a rematch in the UFC 277 headliner in Dallas, Texas. Nunes fell short against Pena in the first fight, dropping her bantamweight gold via submission loss in the second round in what marked one of the biggest upsets in the history of mixed martial arts.

Ahead of the rematch, Nunes is confident she has made all the necessary adjustments and will look to get her hands back on the bantamweight gold. Following her devastating loss to Pena back at UFC 269, Nunes made some significant changes, with her first step being to walk away from American Top Team.

Nunes opened her own gym and currently trains there. However, she also travels to different gyms, making great use of other talents to sharpen her skill-set.

Amanda Nunes is training at Fortis MMA; the same gym Stipe Miocic trained at for his title fight against Junior dos Santos

UFC 277 goes down inside American Airlines Center in Dallas, Texas. For the last week of her fight camp, Nunes is spending her time training at the Fortis MMA gym in Dallas, Texas. Home to some of the finest UFC fighters including Uriah Hall, Fortis MMA has become a common name in the world of mixed martial arts.

“Last time we had a champ was in 2017, Stipe came through here and trained the whole week and he ended up winning. So, this bodes well for Amanda, I think.” Sayif Saud, owner of Fortis MMA said on UFC Embedded.

The last time Fortis MMA had a champ in preparation for a title fight was when Stipe Miocic took on Junior dos Santos at UFC 211 back in May of 2017. Miocic won the fight via stoppage in the first round, in what marked his second successful title defense of the heavyweight gold.

As far as the history of the gym goes whenever a champion has walked inside Fortis MMA to train for a week ahead of a title fight, it looks like Nunes has the luck on her side. Will she be able to replicate Miocic’s last visit at Fortis MMA back with a title win over Julianna Pena at UFC 277? Only time will tell.