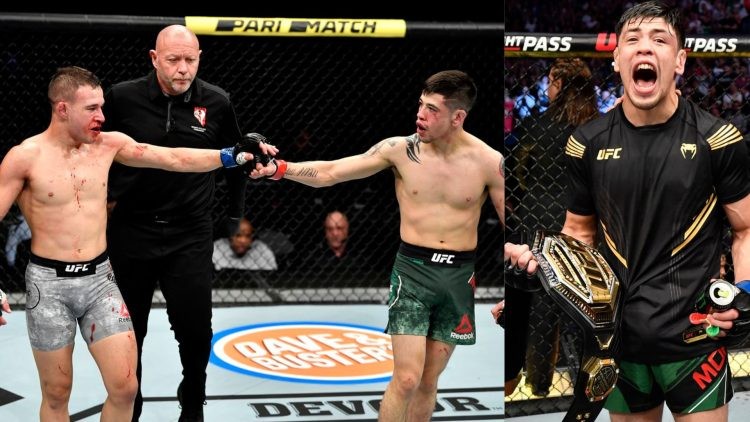 UFC 277 features an exciting co-main event between former UFC flyweight champion, Brandon Moreno and Kai Kara France. It’s a rematch between two of the best flyweights in the world, but this time the interim UFC flyweight title will be on the line.

Brandon Moreno is coming off a decision loss against the champion, Deiveson Figueiredo. on the other hand, Kai Kara France is coming off a win against one of the toughest opponents in the division, Askar Askarov.

With Deiveson Figueiredo looking to move up to bantamweight and dealing with injury, UFC decided to put the interim title on line for this fight. And fans love the idea of Moreno and Kai Kara France battling it out for 5 rounds. But, who will come out victorious in this flyweight matchup?

This is going to be a barn burner and can be the best fight of the night. Both Moreno and Kai Kara France are two of the most exciting fighters in the division and it can be assured that they will put high-level MMA on display in the co-main event.

This is not going to be a completely striking battle as it was the first time. If the fight goes to the 4th and 5th rounds, Moreno will be looking to test Kai Kara France’s ground game.

Brandon Moreno has improved immensely since the first fight and even become the UFC flyweight champion. Both his striking and ground game has improved a lot. He was able to submit Deiveson Figueiredo in their rematch and he was able to fight through adversities in the striking exchanges with the champion.

Overall, Brandon Moreno looks like the more complete and better fighter in this matchup. But, the most crucial factor in the fight is going to be round 1.

The most preferred way to victory for Kai Kara France is going to be an easy finish. He is very powerful when he is fresh and he has secured a few vicious KO wins in his recent fights. However, Moreno has fought Deiveson Figueiredo, who is arguably the hardest hitter in the division, three times.

Even though Figueiredo was able to rock and hurt Moreno on numerous occasions the Mexican star was able to survive everything Figueiredo had to offer. So it can be said that Brandon Moreno will survive Kai Kara France’s power in the early rounds.

Moreno will put on high pace and high volume and fans can expect to see Kai Kara France gassing out in the later rounds. As the round progresses, it’s very likely that Moreno will secure the win. Now it’s hard to finish someone as durable as Kai Kara France, but Moreno should be able to secure a decision win at UFC 277.