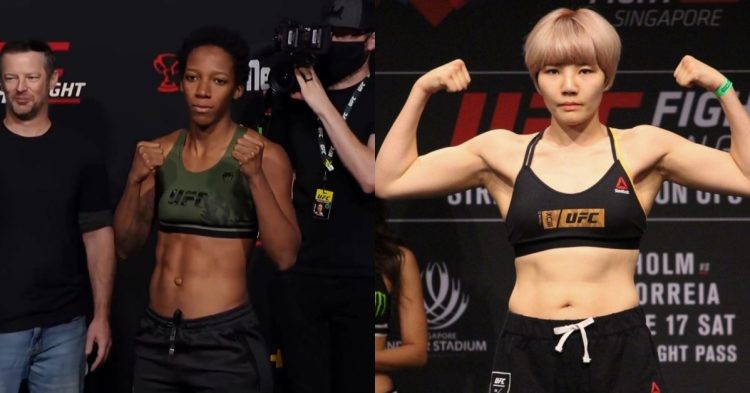 Ji Yeon Kim will step inside the Octagon to fight Joselyne Edwards at UFC 277. The women’s bantamweight bout will be taking place in the early prelims of the upcoming PPV in Texas. Joselyne beat Ramona Pascual at UFC 275 in her last fight. Kim, on the other hand, lost to Priscila Cachoeira via unanimous decision on her last outing in February.

Joselyne Edwards came into the UFC in January of 2021 with a record of 9-2. She defeated Wu Yanan on her UFC debut. However, Joselyne went on to lose both of her next 2 fights against Karol Rosa and Jessica-Rose Clark. But she got back to the winning column following a move to the featherweight division against Ramona Pascual in June of this year.

Ji Yeon Kim has been a part of the UFC since 2017. She lost to Lucie Pudilová on her promotional debut. Although Kim did beat Justine Kish and Melinda Fábián back-to-back following the loss to Lucie, her career has been on a downhill trajectory since then. Currently, she holds a 3-5 record in the company.

Joselyne Edwards is a good striker with 5 knockouts in her career. However, she has also managed to secure 3 submission wins too. So it gives the fans an idea about where her strengths are. She lands an average of 5.33 strikes per minute, with an accuracy rate of 57%. It shows how fluently she hits on her opponents. However, Edwards does absorb 3.27 strikes per minute too.

Ji Yeon Kim also has a very high output rate. She averages 5.86 strikes per minute with 36% accuracy. Although she has a striking defence of 56%, Kim absorbs 5.64 strikes per minute. It proves how much she opens up during exchanges on the feet. She is much more of a slugger than Edwards. In terms of grappling, the 32-year-old has a takedown defence of 36%.

It is hard to predict how this bout may play out. Joselyne has a much better ground game than Kim. Hence, the 26-year-old has the option to take the fight to the ground if she wants to avoid Kim’s wild punches. But the Korean fighter does have 3 submission wins. So it will be intriguing to see which direction the bout goes during grappling exchanges.

But Joselyne will have an advantage heading into the fight. She is 6 years younger than Kim and has a decent height advantage. It will help her to maintain her distance from Kim’s offence. But she can also take the bout to the ground and grind out a decision victory. Plus Kim is on a 3-fight losing streak. So Edwards will be the smart pick for this Saturday.