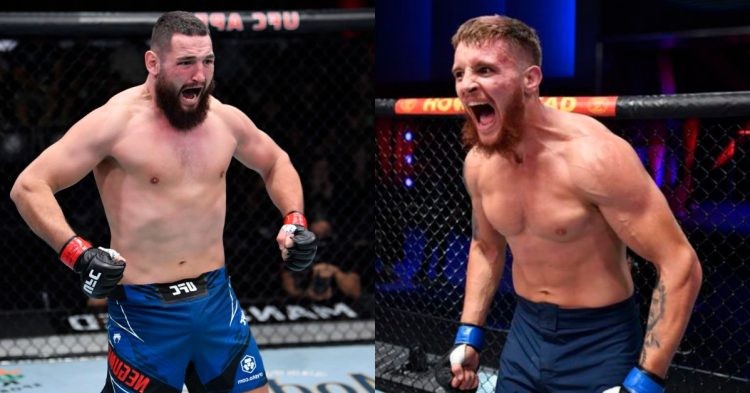 Nicolae Negumereanu vs Ihor Potieria at UFC 277. (Images via Twitter)

Light heavyweight fighters Nicolae Negumereanu and Ihor Potieria will face each other in the early prelims of UFC 277. Nicolae won against Kennedy Nzechukwu at UFC 272 via split decision in his last fight. Potieria, on the other hand, will be making his main roster debut with the bout this Saturday.

Ihor Potieria took on Lukasz Sudolski at Dana White‘s Contender Series in November of 2021. Despite being an underdog, Ihor caught everyone by surprise and ran through Sudolski. Ihor finished his opponent with ground and pound at the 3:41 mark of the very first round.

Nicolae Negumereanu was the RXF light heavyweight champion before coming into the UFC. He had a record of 9-0 heading into his UFC debut against Saparbeg Safarov. Although it was not a lacklustre fight, Nicolae was at the wrong end of the judges’ decision. But he has turned his fortunes around with 3 back-to-back wins.

Ihor Potieria has not had the opportunity to showcase his grappling skills yet. Alongside 9 knockout wins, Potieria has 7 submission wins as well. So it is definitely an indication of how well-rounded the Ukrainian fighter is. At one point, he had a record of 3-2. But since his last loss in 2017, Ihor has gone unbeaten in his last 16 fights.

But he will be going up against a fighter who was unbeaten himself until 2019. Nicolae has a very good finishing rate as he boasts a record of 7 knockouts and 3 submissions. However, in his 3 UFC wins, 2 have gone to the judges’ cards. So he is yet to unleash his full power in the Octagon.

His striking stats are not the most impressive in the world. The Romanian fighter absorbs 5.92 strikes while landing only 3.39. So it does prove that he can get stuck while facing pressure from his opponent. However, he does have good wrestling skills. For example, Kennedy Nzechukwu outstruck him by 31 significant strikes in his last fight. But the judges awarded the fight to Negumereanu for his ground control of 3 minutes and 28 seconds.

However, Ihor Potieria is no slouch on the ground. So it is going to be a very interesting fight to witness. They both have power and they have momentum behind them. But, what gives Nicolae the edge, is his experience. Can Ihor overcome the nerves of fighting infront of a sold-out arena? Only time will tell. But for now, Nicolae Negumereanu will be the smart pick to win.