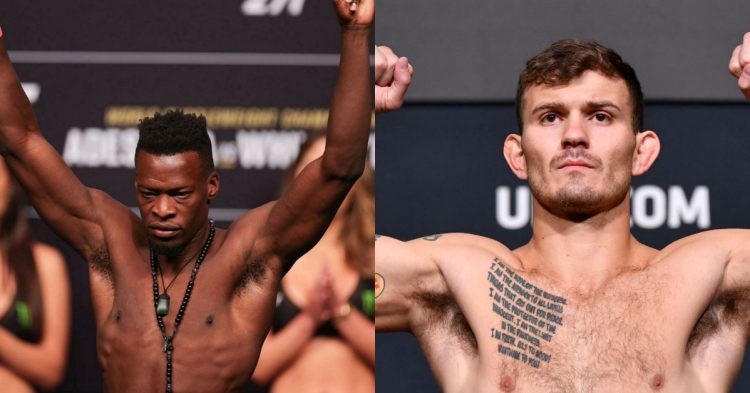 Two newcomers in the UFC will go head to head in the early prelims of UFC 277. Orion Cosce will be fighting Mike Mathetha in the welterweight division of the upcoming Pay Per View (PPV). Both fighters lost in their main roster debut. While Orion lost to Philip Rowe, Mike was choked out by Jeremiah Wells at UFC 271 in February.

Orion Cosce had a thunderous victory at Dana White‘s Contender Series in 2020. He took on Matt Dixon at DWCS and it was a great back-and-forth contest where Orion showcased his skills. Orion ultimately got the job done in the third round as he stopped Dixon via ground and pound. However, his main roster debut was not the most memorable one as he lost the bout via stoppage in the second round.

Mike Mathetha has a kickboxing background and came into the UFC with an undefeated record of 3-0. He is the teammate of the current UFC middleweight champion Israel Adesanya. Nicknamed Blood Diamond, Mike took on Jeremiah Wells on his debut in the promotion. Despite the hype due to his Adesanya connections, Mike fell short and lost the fight.

So both fighters will be desperate to earn their very first win in the UFC. So who will emerge victorious in a fight between Orion Cosce and Mike Mathetha? Let’s take a look at the stats and breakdown down how the contest may play out.

Mike Mathetha could not really live up to the expectations in his first fight in the UFC. However, he does have 3 prior wins before his first UFC fight. On his pro debut, Mike knocked out Jo Van Duin. He then followed it up with a submission win against Hyun Min Hwang. So, he does have all-around abilities.

Jeremiah did not want to risk tasting Mike’s power as he shot for takedowns pretty much from the get-go. Hence, Orion also has the option to take the same route. He has the record of taking down his opponents 1.87 times per fight with an accuracy rate of 42%.

At the same time, he does land 3.70 strikes per minute with an accuracy of 55%. However, standing infront of Mathetha may not be the best idea in the world. Phil Rowe knocked him out in his last fight as Cosce attempted to play the striking game. He will definitely need to rely on his wrestling skills to have the chance of getting over the line.

Although Blood Diamond has an 80% takedown defence, the 34-year-old still needs to work a lot on his ground game. However, he will have a big reach advantage over Orion which may help him to rely on his kickboxing skills to earn the victory this Saturday.

But history has shown that grappler is always the favourite to win over a striker when everything else is in balance. So it will not be surprising to see Cosce getting his very first win in the UFC this Saturday.