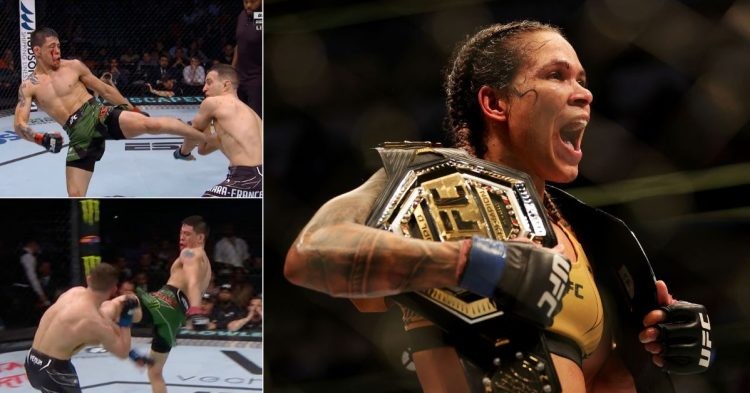 UFC 277 was as advertised with some incredible finishes and some exciting performances. UFC President Dana White reveals that UFC 277 records the highest single-night gate, as 19,442 fans gather inside the arena to witness Amanda Nunes vs Julianna Pena for the UFC’s bantamweight championship.

It was UFC’s 21st consecutive sellout. UFC 277 was a huge success, with Drew Dober and Alexandre Pantoja securing the Performance of the Night bonus, while Brandon Moreno vs Kai-Kara France took home the Fight of the Night honors.

In the main event of the evening, the Lioness roared again as she dominated Julianna Pena in the five-round fight to come home with a decisive unanimous decision win to his name. In the process, she reclaimed her UFC’s bantamweight champion, thereby becoming the only two-time two-division UFC champion. Amanda Nunes is currently the only two-division champion in the UFC.

Brandon Moreno emerged victorious against Kai-Kara France as he took home the UFC’s interim flyweight championship with a third-round stoppage win over the Kiwi fighter. Moreno had a great start to the fight, making great use of his reach and using his jab quite efficiently against a comparatively smaller Kai-Kara.

While Kai-Kara France did have his moments in the second round, Moreno proved to be too much for the Kiwi fighter who succumbed to a vicious knee to the body, followed by a barrage of unanswered shots. With the victory, Moreno upped his head-to-head clash with Kai-Kara France to 2-0.

Other fights on the card included Derrick Lewis vs Sergei Pavlovich which ended with Pavlovich securing the victory via first-round knockout. However, the decision was widely criticized by fans and fighters alike.

Magomed Ankalaev also had his hand raised at UFC 277 as he picked up a second-round stoppage win over UFC veteran Anthony Smith. Lionheart reportedly broke his leg during the first round, paying the price for it against Ankalaev, who demanded a title shot soon after the victory.

Alexandre Pantoja was also the star of the evening, pressuring Alex Perez from the opening bell. He secured his third straight victory, in a quick work of Perez with a first-round submission win to his name.

UFC 277 was highly exciting and leaves the door open for thrilling match-ups in the future.