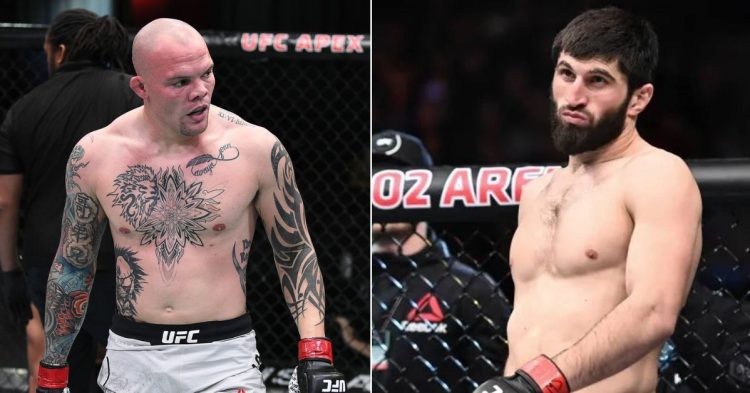 Anthony Smith will return to action against #4 ranked Magomed Ankalaev on the main card of UFC 277 which goes down this weekend in Dallas, Texas.

Magomed Ankalaev is on an eight-fight winning streak, being looked up as one of the biggest threats to the light-heavyweight throne. Meanwhile, Smith is on an incredible three back-to-back first-round finishes to his name and will look to maintain his position in the winning column as he makes the walk to the Octagon this weekend at UFC 277.

Ahead of the fight, let’s predict Magomed Ankalaev vs Anthony Smith; the winner of which might quite possibly find himself in the title contention in the UFC’s light heavyweight division.

Magomed Ankalaev is the clear favorite heading into UFC 277 fight against Anthony Smith. He is a crisp striker, with an incredible ground game. Ankalaev doesn’t shy from a slugfest and has all the tools necessary to snap Anthony Smith’s win streak.

However, the same can be said about Smith, who has shown great improvements over the last couple of fights. Smith‘s ability to use the leg kicks against strikers has improved drastically since he fought Aleksandr Rakic and his submission skills on the ground will likely keep Ankalaev away from taking the fight to the ground.

If we look at Anthony Smith against an elite grappler in the form of Glover Teixeira and an elite striker in the form of Aleksandr Rakic, he hasn’t been very impressive. However, looking at his recent fights against the likes of Ryan Spann, Jimmy Crute, and Devin Clark; Smith has found ways to deal with the pressure that often comes in abundance in credible strikers.

Be that as it may, Magomed Ankalaev proved in his fight against Thiago Santos that he can stand toe-to-toe against the heavy hitters of the division.

Moreover, he showed grit and determination in his last fight, recovering quite quickly after a knockdown from Santos. Smith might be able to break Ankalaev down to the point he might be able to sneak out a submission victory, but if the fight remains on the feet and goes to the judges’ scorecard, it’s safe to say Magomed Ankalaev gets his hand raised against Anthony Smith this weekend at UFC 276.