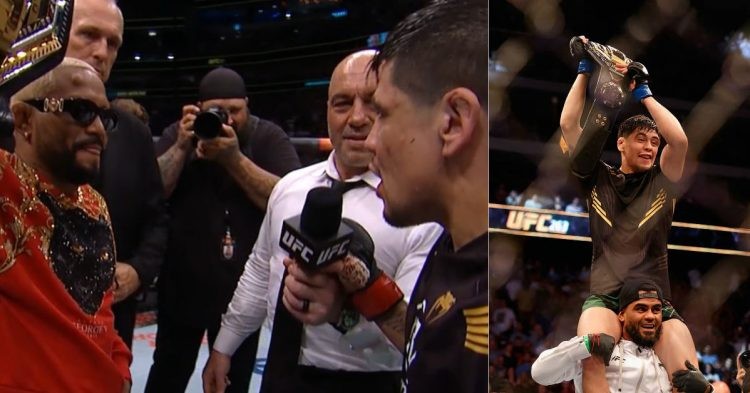 Brandon Moreno stepped inside the octagon to take on Kai Kara France in a five round fight in the co-main event of UFC 277 that took place at the T-Mobile Arena in Las Vegas. There was a lot at stake in this fight, as the winner would become the new interim flyweight champion and earn an opportunity against Deiveson Figueiredo who is the undisputed champion.

In what was anticipated to be a close bout, The Assassin Baby brutally knocked out Kai Kara France in the third round to become the new flyweight champion. It was a very technical fight with both flyweights taking their time to get in the rhythm.

Brandon Moreno is a dawg, a liver shot really shuts the body down #UFC277 pic.twitter.com/JlGGwMGHgc

After facing some adversity early in the third round, Moreno showed great recovery and landed a stunning liver kick and stopped Kai Kara France via TKO. In the post-fight interview, Brandon Moreno wasted no time and called out undisputed champion Deiveson Figueiredo who was in attendance for a fourth fight.

After Brandon Moreno called out Deiveson Figueiredo for a fourth fight in the post-fight interview following his win over Kai Kara France, the undisputed champion offered his response while speaking to commentator Joe Rogan.

For the first time, the quadrilogy will go down between Figueiredo & Moreno for all the gold! #UFC277 pic.twitter.com/q78p9uJY9f

Soon after the champion set his conditions, Moreno agreed to fight in Brazil. He said “I don’t care, I don’t care man. Let’s go.

With both fighters agreeing to fight in Brazil, it would be interesting to see if the UFC actually schedules their fourth fight in Brazil. Do let us know in the comments section who you think will win the fourth fight between Deiveson Figueiredo and Brandon Moreno.