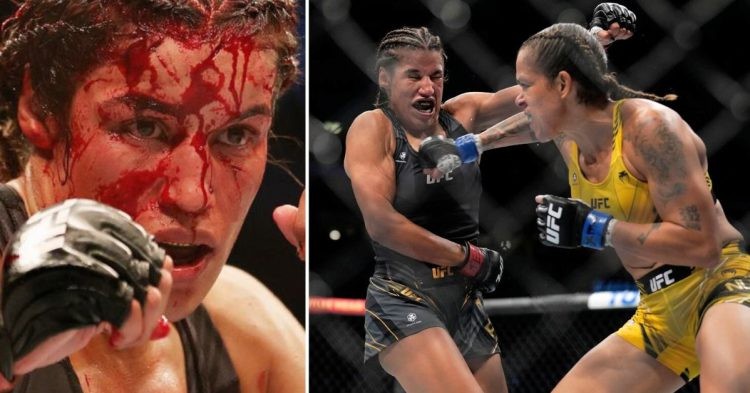 Julianna Pena failed to defend her bantamweight gold in the rematch against Amanda Nunes back at UFC 277 as she suffered a lop-sided unanimous decision loss against the Lioness in the five-round headliner. Nunes dropped Penna multiple times throughout the fight, and didn’t just have an advantage on the feet but also put had incredible success on the ground.

Pena was visibly battered after the fight, bleeding profusely from her forehead. At certain points in the fight, it looked like the Doctor would stop the fight owing to the cut on Penna’s forehead. However, the fight went on as Penna displayed grit and heart, and often had Nunes in trouble despite being severely compromised.

Following the fight, Dana White gave an update on Julianna Pena and revealed that the former bantamweight champion would have to go through plastic surgery following the injuries sustained at UFC 277.

“Yeah, Julianna has got a big chunk missing from her forehead. She’s going to see a plastic surgeon right now. Take some time to heal and then, I don’t know. She got pretty banged up. I mean she got, there was like 5 or 6 knock downs under first two rounds. She was hurt. She needs to take some time off and relax. Spend some time with her daughter and we’ll go from there.” White said during the post-fight press conference at UFC 277.

However, Julianna Pena revealed in an Instagram post soon after that she won’t be requiring surgery. Calling false on Dana White’s update, Pena said, “no chunks missing, no surgery necessary”.

While she did not say it explicitly, Julianna Pena demanded a trilogy fight to settle her rivalry with Amanda Nunes.

“Tougher than a two dollar steak 🥩 Thanks for the love everyone! Just a cat scratch that required a few stitches, no chunks missing, no surgery necessary. Love you all! We’re 1-1 now #peopleschamp #trilogy #penavsnunes3 #lfg” Pena captioned.

Julianna Pena’s toughness and resilience proved just why she was able to defeat Amanda Nunes during the first fight, and with some adjustments, might prove to be a trouble in the trilogy fight if it ever happens.