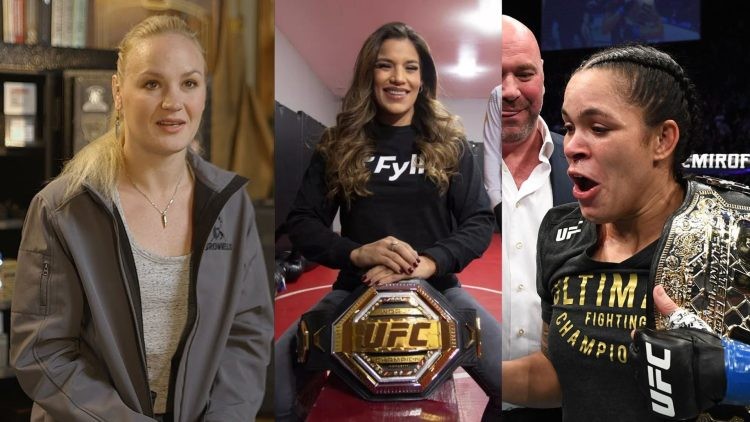 Can Julianna Pena shock the world again? UFC 269 witnessed the biggest upset in UFC history when Julianna Pena submitted Amanda Nunes in the second round. She went into that fight as a huge underdog but after a barn burner, she stood tall with the UFC bantamweight title on her waist.

Even though she has earned the respect of many beating Amanda Nunes once is not enough to prove that you are better than her. Nunes has dominated two UFC divisions for a long time now and has beaten many world champions such as Valentina Shevchenko, Ronda Rousey, Holly Holms, Cris Cyborg, and the list goes on.

So many fans believe that it is Amanda Nunes, who had an off night at UFC 269. The pressure will be on Nunes to get her title back at UFC 277, but Julianna Pena will have to prove that the first time was not a fluke. And it seems the UFC flyweight champion, Valentina Shevchenko does not see Pena winning the rematch.

In a recent interview with James Lynch, Shevchenko talked about Nunes losing to Pena and how the rematch would play out.

Valentina Shevchenko explained that Julianna Pena’s mind games are really effective and entertaining. Shevchenko, who has fought both Nunes and Pena, is confident that if Nunes shows up in great shape and with a good training camp then she will easily beat Julianna Pena.

When asked about whether she will consider fighting Julianna Pena, Shevchenko stated:

“It’s doubtful that the second fight will be the same result outcome. It’s very dubtful. But I like how Julianna is playing mean and trying to speak bad about everyone no matter who. This is I feel a strategy for every person who is trying to get attention. This is very fun to watch.”

One of the biggest factors in the rematch is going to be the mindset of Amanda Nunes. The aura of invincibility is gone after the first fight. Julianna Pena did not show better striking or grappling skills than Nunes. But she proved that on that night she was the tougher fighter, which made Nunes quit. This is unfamiliar territory for Nunes and it will be intriguing to see how she reacts when Pena tries to bully her again in the rematch.