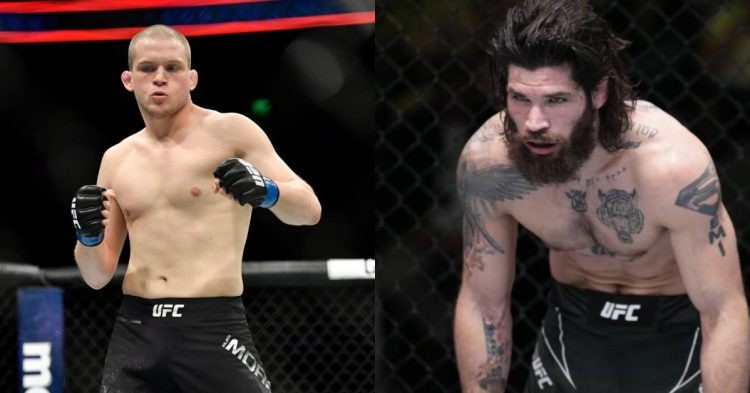 Alex Morono vs Matthew Semelsberger at UFC 277 (Images via Twitter)

UFC 277 goes down this weekend and it features two significant title fights. Amanda Nunes will get her shot at redemption as she finally gets the rematch against Julianna Pena. In the co-main Brandon Moreno will fight Kai Kara France for the interim UFC Flyweight Championship. The event also has hometown hero Derrick Lewis on the main card.

But the stacked card also features some amazing fights in the prelims as well. In the main event of the preliminary card, Alex Morono is scheduled to fight Matthew Semelsberger. The bout is set to take place in the welterweight division and it is scheduled for 3 rounds.

Alex Morono made his pro-MMA debut in 2010. But he did not fight in the UFC debut until 2016. He currently holds a record of 10-4-1 in the promotion. At the moment, Morono is on a 3 fight win streak which includes victories over the recently retired Donald Cerrone, David Zawada and Mickey Gall.

Matthew Semelsberger started his pro-MMA career one year after Alex joined the UFC. It just shows the difference in experience between the two opponents. Matthew made his debut in the company in 2022 and holds a record of 4-1 in the promotion. He has beaten A.J. Fletcher and Martin Sano Jr in his last two fights.

Matthew Semelsberger has 10 wins in his career and 6 of them came via knockout. So far in the UFC, Semelsberger has managed to have two knockout wins. As the stat may suggest, the 29-year-old is a very good striker. He averages 5.01 strikes per minute while absorbing 4.55 at the same time. ‘Semi the Jedi’ also holds a 100% takedown accuracy.

But Matthew will need to work on his takedown defence as he was taken down 4 times in his last fight. However, his takedown defence is unlikely to get tested as Alex Morono will try to knock him out on his feet. Morono has 6 knockouts and 6 submissions. But the majority of his submission wins have come outside the UFC.

Alex Morono lands at a rate of 5.21 strikes per minute and absorbs 3.93 strikes in the same period. Although he has just 25% takedown accuracy, Morono holds a better takedown defence than Semelsberger with 53%. In all likelihood, this contest will come down to who is the better striker. From the stats, it does look like Morono will have a slight edge.

Morono has also fought at a much higher level than Matthew for the majority of his career. They are both around the same age as well. So there will be no advantage for either fighter on that field. Alex is a bit better about implementing his defence. So ‘The Great White’ will be the smart pick to win this weekend. But it will not be surprising to see Semelsberger getting the win either.