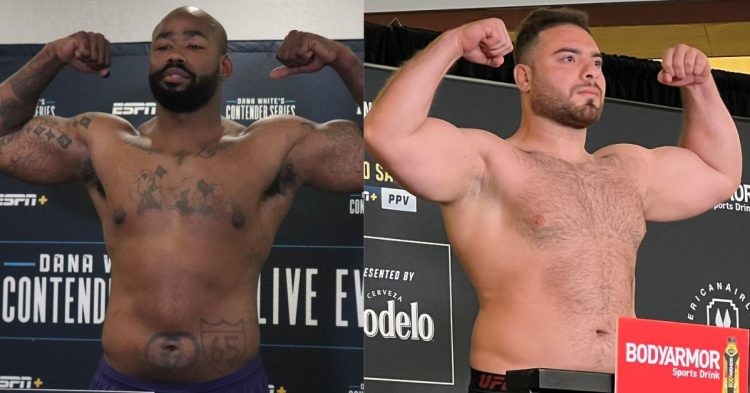 UFC 277: Pena vs Nunes 2 will begin with its proceedings on July 30th at the T-Mobile Arena in Las Vegas. Heavyweight prospect Hamdy Abdelwahab will make his debut in a three-round bout in the prelims against Don’tale Mayes.

The Hammer previously competed in Jorge Masvidal’s Ion fighting championship and amassed a record of 5-0. What makes Abdelwahab a fighter to watch out for is his destructive knockout power, he has knocked out all his opponents so far and it would be interesting to see whether he manages to replicate his past performances in the UFC.

On the other hand, Don’Tale Mayes is coming off a stunning KO/TKO win in his last fight against John Parisien back in December 2021. After a tough start to his UFC career with two back-to-back losses against Ciryl Gane and Rodrigo Nascimento, Lord Kong bounced back in terrific fashion. Consequently, he would try to extend his winning run by outclassing Hamdy at UFC 277.

Going into this UFC 277 prelims matchup against Hamdy Abdelwahab, Don’Tale Mayes will have a massive size advantage over his opponent. He has a four-inch height and nine-inch reach advantage over Hamdy which will make a huge difference if this fight ends up in an out and out striking war.

Both the heavyweights have good standup skills and it is needless to say that this bout would most likely end with one fighter getting knocked out due to their aggressive approach.

Despite Abdelwahab’s great knockout power, his inexperience and lack of defense would cause a huge problem for him in this fight. With that being said, Mayes is the favourite to win this fight because he can control the pace as per the situation demands.

So the only way for Abdelwahab to win is by using his wrestling skills. Unless Hamdy manages to land takedowns and control Don’Tale on the ground, it would turn out to be a difficult night for the debutant at UFC 277.