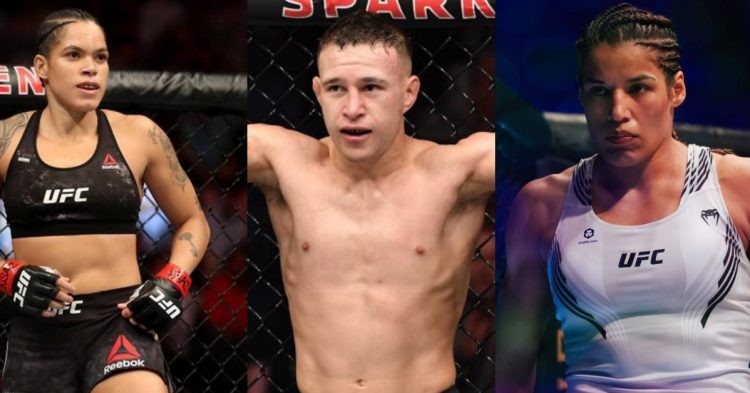 UFC is back in Texas this weekend with a big Pay Per View (PPV) card. UFC 277 is set to go down inside the American Airlines Center in Dallas. In the main event of the PPV, UFC Women’s Bantamweight Champion Julianna Pena will defend her belt for the first time against Amanda Nunes. Pena took the belt from Nunes at UFC 269 by submitting her in the second round.

However, Amanda Nunes is back and she is back with a vengeance. The Lioness will have a point to prove against Pena. She has insisted that injuries riddled her last camp against Julianna in 2021. But Amanda is now with a new camp and it seems like she has got her mojo back. Hence, the rematch is almost guaranteed to be a completely different bout than the first.

The champ will also want to make a statement. There is a notion amongst the MMA fans that Julianna Pena’s win over Amanda Nunes was a fluke. As a result, Pena will also try to prove herself and show the fans that her victory over Nunes was not a fluke by any means. So it promises to be a very interesting bout as the outcome will have an impact on the discussions about who the best female fighter in UFC is.

In the co-main event, former UFC Flyweight Champion Brandon Moreno will be fighting for the interim title against Kai Kara France. They previously fought in 2019 where Moreno won via unanimous decision. Hometown hero Derrick Lewis will also be on the card, taking on Sergei Pavlovich. Light heavyweight fighter Anthony Smith will open the card against Magomed Ankalaev.

Which songs did Julianna Pena and Amanda Nunes use at UFC 277?

On the night of the biggest win of her career, Julianna Pena walked out to ‘Psycho’ by Puddle Mudd. However, against Sara McMann at UFC 257, she came to ‘Monster’ by Kanye West featuring Jay Z, Rick Ross, Bon Ivar and Nicki Minaj. Against Germaine de Randamie, Pena walked out to ‘Loyal Brave & True’ by Christina Aguilera.

Amanda Nunes walked out to ‘Troca de Calcada’ by Marilla Mendonca at UFC 269. For her featherweight title defence against Megan Anderson at UFC 259, Nunes walked out to ‘American Oxygen’ by Rihanna. The 34-year-old used ‘The Champion’ by Carrie Underwood feat. Ludacris for her fight against Felicia Spencer at UFC 250.

Which songs did Brandon Moreno and Kai Kara France use at UFC 277?

Former 125lbs champion Brandon Moreno used ‘El Corrido del Bebe Asesino’ by Ariel Macias at UFC 270 where he lost the title to Deiveson Figueiredo. He used the same song for both of his title fights against Deiveson Figueiredo at UFC 263 and UFC 256.

Kai Kara France took on Rogerio Bontorin at UFC 259. For that fight, he walked out to ‘Poi E’ by Patea Maori Club. Much similar to his opponent Brandon Moreno, Kai has also used the same song in his last 3 fights.

Which songs did Derrick Lewis and Sergei Pavlovich use at UFC 277?

Derrick Lewis will make his return to fighting following his loss to Tai Tuivasa at UFC 271. For his fight against Tuivasa, the Texas native walked out to ‘Tops Drop’ by Fat Pat. Lewis walked out the same tune for his fights against Ciryl Gane and Chris Daukaus.

Sergei Pavlovich made his return to the UFC in 2022 after a layoff of almost 3 years. In his return fight, Sergei took on Shamil Abdurakhimov. For that particular event in London, Sergei walked out to ‘Fly Away on the Wings of Wind.’ He used the same song in his fight against Maurice Greene.

Which songs did Anthony Smith and Magomed Ankalaev use at UFC 277?

Anthony Smith is a veteran of the sport. Smith is currently on a 3 fight win streak heading into the fight against Magomed Ankalaev. For his fight against Jimmy Crute at UFC 261, he walked out to ‘Return of the Mack’ by Mark Morrison. Anthony used ‘Ready to Die’ by The Notorious B.I.G for his bout against Devin Clark. He used ‘Return of the Mack’ once again in the Ryan Spann fight.

Magomed Ankalaev is a rising contender in the light heavyweight division. For his fight against Volkan Oezdemir, Ankalaev used ‘Krasivaja Lezginka’ by Muzyka and Masinu. He had the same tune for his last fight against Thiago Santos in March of 2022.