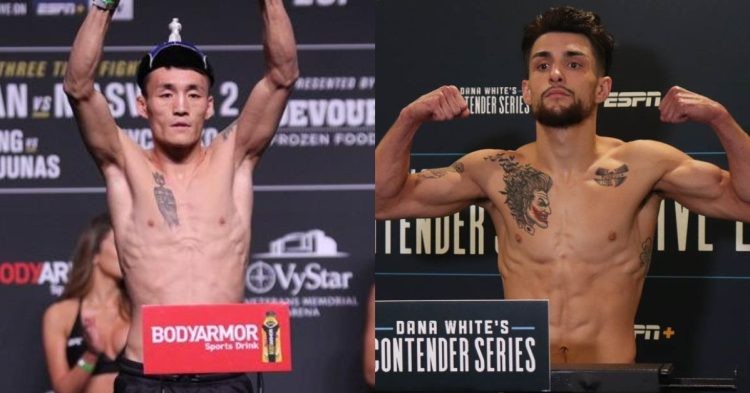 UFC 278: Usman vs Edwards will begin with its proceedings this weekend on August 20th at the Vivint Arena in Salt Lake City, Utah. This PPV features a mouthwatering bantamweight bout between Aoriqileng and Jay Perrin that is scheduled for three rounds and will take place on the early prelims of the card.

So far both the bantamweights have had their fair share of downfalls in the UFC with Jay Perrin yet to register his first win in the promotion and Aoriqileng losing his first two fights.

However, The Mongolian Murderer bounced back from his losses and earned his first UFC win in his last matchup back in April this year as he knocked out Cameron Else in the first round. It is needless to say that he would love to carry on the winning momentum and pick up his second straight win against Perrin this weekend.

Whereas this could well be a make-or-break fight for Jay Perrin as a second straight loss would mean that he has suffered three consecutive losses if we include his DWCS fight and that would look very bad on his resume.

As we move ahead, let’s compare the stats of these two bantamweights that will clash inside the octagon this weekend at UFC 278.

This is an exciting matchup considering both Aoriqileng and Jay Perrin like to strike and have different skills in their standup game. The Mongolian Murderer is a type of fighter who is very aggressive with high striking output and is not scared of walking into shots.

On the other hand, Perrin is someone who is much more technical and has good boxing skills. With that being said, if this fight turns out to be an all-out striking battle, then it would be difficult for Jay given his low striking output.

Besides, he is not as durable as Aoriqileng and despite the Mongolian bantamweight absorbing a lot of strikes in his fights, he has the power and unpredictability that gives him an edge in this matchup.

Moreover, Aoriqileng is a better grappler out of the two fighters and can also outclass Jay Perrin in that department. Therefore we can expect Aoriqileng to get his hands raised by the referee at the end of the UFC 278.