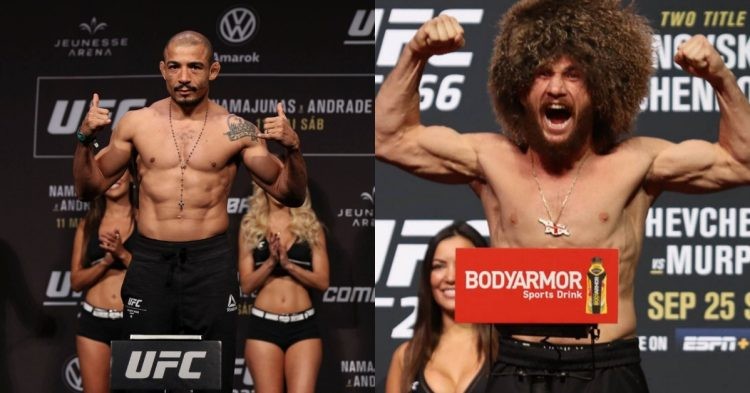 Former UFC featherweight champion Jose Aldo will return this weekend at UFC 278. He will face rising contender Merab Dvalishvili on the main card of the PPV. While Aldo is coming off of a great win against Rob Font, Merab defeated Marlon Moraes at UFC 266 via a second-round knockout. Merab is ranked no. 6 in the bantamweight division, while Aldo is currently sitting at 3rd.

The King of Rio moved down to the bantamweight division after a great run in the 145lbs division. Although there were doubts about him being able to make the weight safely, Aldo has put all the doubts to bed. Despite losing both of his first two fights in the division, Jose is on a 3-fight win streak which includes wins over the above-mentioned Rob Font, Pedro Munhoz and Marlon Vera.

On the other hand, Merab is on a 7-fight win streak. He lost both his first two first fights in the UFC against Frankie Saenz and Ricky Simon. However, he went on a great run that saw him beating the likes of Casey Kenney, John Dodson, Cody Stamann and Marlon Moraes. But the bout against Jose Aldo will certainly be the biggest fight of his career so far.

Fans wanted to see Jose Aldo ride off into the sunset following his loss against Alexander Volkanovski at UFC 237. However, Aldo did not give up on himself and reinvented his career in the 135lbs division. Not only has he altered his fight style to suit the current state of his body, but he is also able to push an insane pace despite being 35 years of age.

Speaking of being able to push a pace, Merab’s nickname is The Machine. So it should give the fans some idea of the level of cardio that Merab possesses. He is a dominant wrestler who tires out his opponents with relentless pace and repeated takedown attempts. The Georgian fighter averages 7.30 takedowns per fight while landing 4.26 strikes per minute.

Hence, outpacing Merab will not be an option for Jose. His striking stats have also taken a big hit due to the big losses against the likes of Max Holloway and Petr Yan. Aldo lands 3.61 strikes per minute while absorbing 3.74 strikes at the same time. Despite having a 90% takedown defence, Aldo will not be safe against Merab’s constant threat of level changing.

Both fighters have the dream of capturing the UFC bantamweight belt. However, it may just be one of the times when the young lion dethrones the older one to claim the territory. At this stage of his career, Merab may just be the worst match-up for Aldo. The 31-year-old’s tenacity and aggression will put Jose under a lot of pressure. Hence, Merab Dvalishvili will be the smart pick this weekend.