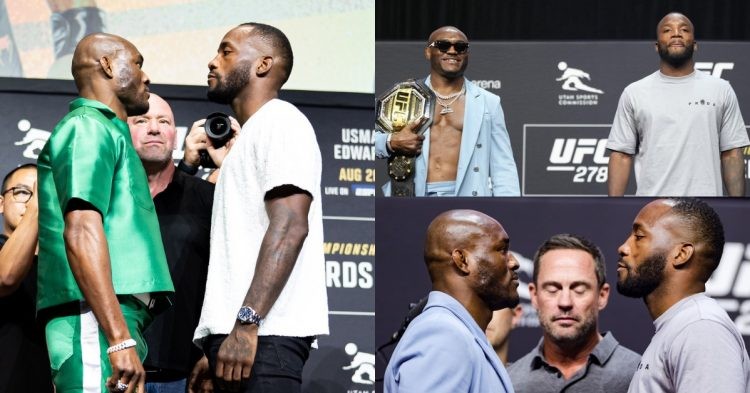 UFC welterweight champion Kamaru Usman will return to action this weekend as he defends his belt against long-time rival Leon Edwards in a five-round main event clash at UFC 278. This highly anticipated rematch will take place at the Vivint arena in Salt Lake City, Utah.

It is needless to say that the British contender would be looking to avenge his 2015 loss against Kamaru Usman in this rematch and dethrone the welterweight champion. He is in great form and will enter the octagon on the back of a nine-fight winning streak. However, it is easier said than done to outclass Usman as the champion is yet to suffer a loss in the UFC.

As we move forward, let’s compare the stats of these two welterweights that will square off against each other in a five-round main event clash.

Will Leon Edwards be able to stop Kamaru Usman’s undefeated run at UFC 278?

This five-round main event title fight between Kamaru Usman and Leon Edwards at UFC 278 has violence written all over it. Taking a look at their styles, the welterweight champion is a highly skilled wrestler who likes to control the fight on the ground.

However, in recent years, Usman has developed his striking abilities under the tutelage of coach Trevor Whittman and has emerged into one of the most dangerous standup fighters in the division. The Nigerian Nightmare has finished two of his last three opponents via knockout and has outstriked Colby Covington in his last fight.

On the other hand, Leon Edwards likes to mix it up with his striking and grappling skills. However, Rocky cannot rely on his takedowns against Kamaru as he did against Nate Diaz because the welterweight champion has exceptional takedown defense skills.

So the key to winning for Edwards would be to outstrike Usman and claim a decision win as the Nigerian Nightmare is very durable and can absorb big blows. However, it is easier said than done as Rocky cannot be careless while engaging in striking exchanges after Nate Diaz almost finished him in their matchup at UFC 263.

In the end, fans can expect a close battle between these two welterweights but the likelihood of Kamaru successfully defending his belt is quite high given his devastating power and well-rounded skills.