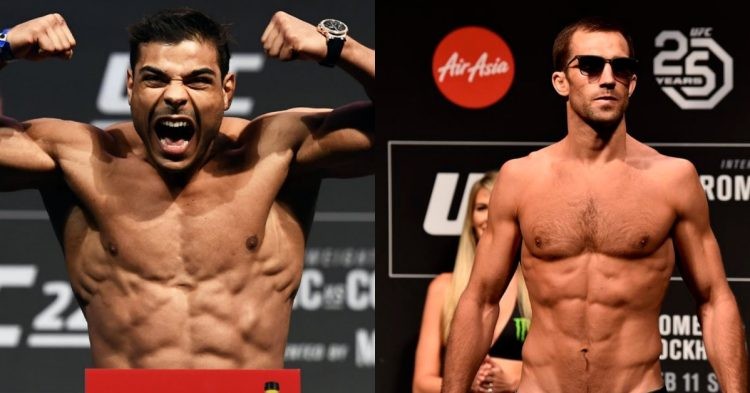 Paulo Costa’s last outing did a lot of damage to his brand. Not only did he not make the weight for the originally scheduled middleweight bout against Marvin Vettori, but Costa also pushed for the bout to be moved up to light heavyweight. He lost the bout ultimately via unanimous decision. In the fight prior to that, Costa lost to Israel Adesanya at UFC 253.

Luke Rockhold also had a horrible result in the last fight against Jan Blachowicz at UFC 239. It was Luke’s very first fight in the light heavyweight division. However, Luke did not fare well at all and was knocked out in the second round. Rockhold has lost 3 fights in his last 4 and all of those losses came via knockout. So there remain some valid questions about the durability of his chin.

If the comparison between Luke Rockhold and Paulo Costa is purely based on skillsets, Luke wins the battle every day of the week. Rockhold’s striking is extremely potent and is very technically sound. He does not engage in meaningless brawls and shoots for a takedown whenever he senses that the bout is getting heated on the feet. He also holds a BJJ black belt.

Although Paulo Costa is almost the same in terms of their skills, Costa is much more reckless in his approach to fighting. He engaged in an all-out brawl against Yoel Romero at UFC 242 to entertain the fans instead of earning a safe and sound victory. So it will be very interesting to see what happens when Costa and Luke go head to head.

Costa lands 6.85 strikes per minute while absorbing 7.02 strikes at the same time. It just goes to show exactly how reckless he really is while striking. Paulo has a takedown defence of 80% and holds a 50% takedown average. On the other hand, Rockhold lands 4.18 strikes per minute while absorbing 2.43. He also averages 0.67 takedowns per fight and attempts 1.1 submissions per fight.

So it is clear that Luke is the much better fighter on paper. However, he has been through a lot of bad stoppage losses in the UFC. Rockhold’s chin has not really been rock solid so far. It will not be surprising to see one big punch from Costa putting Rockhold’s lights out. Hence, Borrachinha will be the favourite to win this Saturday.