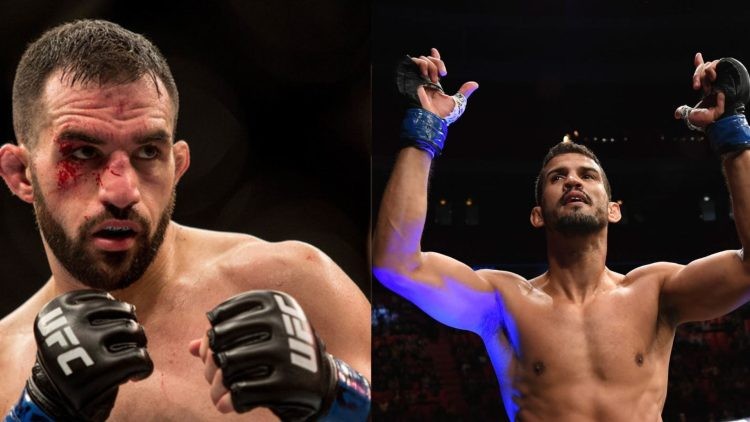 Jared Gordon is scheduled to fight Leonardo Santos in a lightweight bout at UFC 278: Usman vs. Edwards 2 on Saturday, 20th August 2022.

Gordon and Santos are both coming off from losses, and this Saturday they will be looking to bounce back from their losing skid. Jared is not a very durable fighter but often goes on to show his absolute doggedness in a fight. His cardio is also a major aspect of his game that he relies on.

On the other hand, Leonardo Santos is a master grappler and a standout Brazilian jiu-jitsu artist. His age should not be much of an issue as we’ve seen experienced old fighters doing absolute wonders like Glover Teixeira. Santos is also coming off a loss but he is a fighter who packs a powerful punch.

Jared Gordon has a record of 18-5 in his professional career. He has three inches of height and seven inches of reach disadvantage over Santos, but that should not be a big factor in this fight.

Gordon is much younger and has a gas tank that he weaponizes in his fights. But if he can manage to get past the early rounds of grappling and power shots of Santos, he can see himself in the late rounds. This is because explosiveness of Santos in the first rounds will deplete his energy and from that point, it will be Gordon’s fight.

Leonardo Santos is a very well-rounded fighter and also a competent finisher. He is coming off a two-fight loss skid in which he was finished in the second and third rounds due to his poor cardio.

However, Santos has some serious power in his hands that he can use against Gordon to clip him in earlier rounds before gassing out. He has used his dangerous techniques against Kevin Lee, and Stevie Ray, and almost finished off Clay Guida.

Santos may have been past his prime at 42 years old, but he held on against Dawson before the late finish and nearly finished Guida. Nonetheless, it is a fact that he cannot risk getting clipped as he can no longer sustain damage for the full fight. Leonardo has to use his grappling to control the fight on the ground or find an early finish on his feet.

Who will leave the Cage Victorious?

To win this fight, Gordon will have to find a way to survive the much more dangerous Santos on their feet and especially on the ground, to the point where Santos wears himself out chasing for a kill.

Gordon is known to have a fragile chin despite being a distance fighter. And even though he has a huge gas tank this weakness might see him getting finished in early rounds. Meanwhile, Santos is a much better striker here and an even more dangerous grappler.

In conclusion, if Santos can’t find an early finish by stoppage or submission, Gordon will start to utilize his cardio in the last round and possibly secure a decision or stoppage victory.