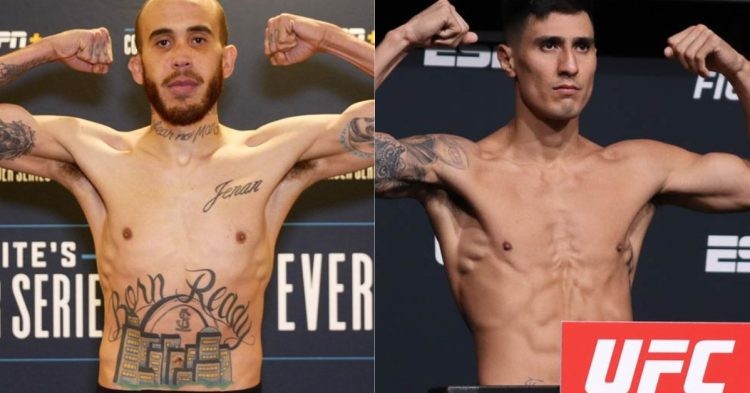 The highly anticipated UFC 278: Usman vs Edwards is all set to go down this weekend on August 20 at the Vivint Arena in Salt Lake City, Utah. Subsequently, this PPV features several mouthwatering clashes that fans should keep a close eye on.

One such matchup is the three round featherweight bout between Sean Woodson and Luis Saldana that will take place on the prelims of this PPV. Both the fighters are highly touted prospects with great skills and subsequently, fight fans around the world can expect an entertaining clash.

As we lead up to this fight, let’s compare the stats of these two featherweights that will square off inside the octagon at UFC 278.

Sean Woodson made a big statement as he earned his UFC contract by knocking out lightweight prospect Terrance McKinney in the DWCS in 2019. He continued on the same momentum and picked up a unanimous decision win in his UFC debut.

However, Woodson was submitted by Julian Erosa in his next fight and suffered his first loss. Thereafter The Sniper won two fights out of which he knocked out Collin Anglin in his last fight. Subsequently, The Sniper will look to add a third straight win this weekend and get one step closer to the top 15 of the featherweight division.

Luis Saldana would also try to string up a streak of wins and therefore this fight at UFC 278 is very crucial for the 31-year-old featherweight fighter. Speaking about this matchup, Sean Woodson has a sizable height and reach advantage over his opponent Luis Saldana who could prove to be the difference maker in this three-round bout.

Because The Sniper’s kicks are very lethal and he can take apart Luis from a safe distance without overextending. Both the featherweights have good striking abilities and we can expect an all-out war as they like to stand and bang.

Out of the two fighters, Woodson is the more dangerous fighter with great knockout power which makes him a big threat in this matchup. Moreover, he has a higher striking output which could prove significant in the judges’ scoring if the fight goes to distance.

The only department where Saldana has an edge is grappling. If he manages to mix it up and control the fight on the ground then there is a high possibility that he would win this battle. So far Woodson has done decent against fighters with superior grappling skills and overpowered his opponent with his striking.

Hence we can expect The Sniper to defend takedown attempts and dominate Saldana on the feet and get his hands raised at UFC 278.