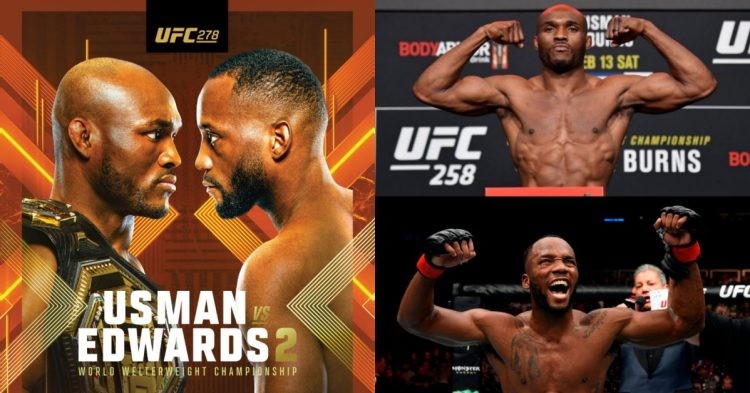 The no. 1 pound-for-pound fighter Kamaru Usman will be in action this weekend. UFC 278 goes down on August 20th in Salt Lake City, Utah. The welterweight champ Usman will defend his title against Leon Edwards, whom he beat in 2015. While Edwards is unbeaten in his last 10 fights, Kamaru is on a 15-fight win streak.

The last time they crossed paths, it was in the prelims of a fight night event. However, they will be headlining a massive PPV this Saturday. Both have improved massively since the last time they fought.

While Kamaru has evolved into a great power-puncher, Edwards has worked on his takedown defence immensely in the last 7 years. The outcome of the bout will determine who has progressed more since their last duel. But Usman will definitely be the favourite to retain his belt heading into the fight.

In the co-main event of the night, former middleweight champ Luke Rockhold will fight Paulo Costa. Both are coming off losses as Costa lost to Marvin Vettori in his last UFC fight, while Rockhold was knocked out by Jan Blachowicz during their fight in 2019.

Which songs did Kamaru Usman and Leon Edwards use at UFC 278?

Kamaru Usman last fought against Colby Covington at UFC 268. For the much-anticipated rematch against Colby, Usman walked out to ‘Yaba Buluku’ inside the Madison Square Garden (MSG). In the fight prior to that, Usman walked out to ‘Alarm Clock’ by Burnaboy ft. Kitale. For his bout against Gilbert Burns, Usman used ‘No Games’ by Rick Ross ft. Future.

Leon Edwards‘ last fight was against Nate Diaz and he used ‘Shabba Madda Pot’ by Dexta Daps. He also used the same song for his bout against Belal Muhammad in 2021. Rocky took on Rafael dos Anjos in 2019 and he used ‘Grinding All My Life’ by Nipsey Hussle.

Which songs did Paulo Costa and Luke Rockhold use at UFC 278?

Paulo Costa used ‘Balenciaga’ by fewtile as his walkout song against Marvin Vettori at UFC Fight Night: Vettori vs Costa. Before that fight, he took on Israel Adesanya at UFC 253. For his title fight, Costa used ‘Divisa de Fogo’ by Grupo Fogo no Pe. The Brazilian fighter earned the title shot by beating Yoel Romero at UFC 241. For that fight, Costa used ‘Dream On’ by Aerosmith.

His opponent Luke Rockhold opted to use a song by DMX called ‘The Rain’ for his fight against David Branch. Rockhold also used the same song for his UFC 221 fight against Yoel Romero. But he changed it up for his last fight against Jan Blachowicz and walked out to ‘Live is Life’ by Opus.

What songs did Jose Aldo and Merab Dvalishvili use at UFC 278?

The former featherweight champ Jose Aldo will fight Merab Dvalishvili at UFC 278. Aldo used ‘Run This Town Tonight’ by Jay Z ft. Rihanna and Kanye West against Marlon Vera in 2020. The King of Rio also used the same song for his bout against Pedro Munhoz at UFC 265 and his fight against Rob Font at UFC Fight Night: Font vs Aldo.

Merab, on the other hand, used ‘Midi Midi Movdivar’ by Nikolshow to fight John Dodson at UFC 252. The Georgian fighter used ‘Movdivar’ by Midi Midi as his walk-out song against Marlon Moraes at UFC 266.