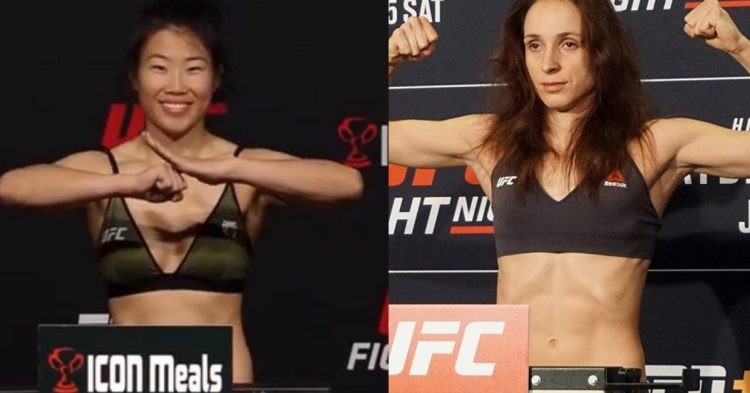 Bantamweight fighter Lucie Pudilova will return to the UFC for her second run in the company at UFC 278. She will fight Yanan Wu on the main card of the upcoming UFC PPV. Lucie has won 5 fights out of her last 6 and is on a 2-fight win streak. On the other hand, Yanan has lost all 3 of her last fights against Mizuki Inoue, Joselyne Edwards and Mayra Bueno Silva.

Wu’s tenure in the UFC has been riddled with failure. She came into the promotion with a record of 11-1. The Chinese fighter had lost only to Yana Kunitskaya in 2016 before joining the UFC. However, she has lost 4 of her 5 fights in the promotion. Her only UFC win came against Lauren Mueller in November of 2018. So Yanan has not won a fight inside the Octagon in almost 4 years.

Lucie Pudilova, on the other hand, is getting another chance to prove herself in the UFC. Her previous run in the UFC lasted from 2017 to 2020. During that period, she went 2-5 in the promotion. Her only wins in the promotion came over Sarah Moras and Ji Yeon Kim. She was on a 4-fight losing streak before getting axed from the company in 2020.

Neither Yanan Wu nor Lucie Pudilova is currently at the championship level. While one fighter has already been cut from the promotion once, the other may very well suffer the same fate depending on the result at UFC 278. So, which fighter will be the favourite to get the job done this Saturday? Let’s find out.

Hence, the fight becomes about which fighter can implement their game plan better. Wu will definitely try to take the fight to the ground and attempt to get a submission win. Lucie will try her best to keep the bout on the feet and outstrike Yanan to clinch a decision win. The momentum is certainly with Pudilova. So she will be the smart pick for this weekend.