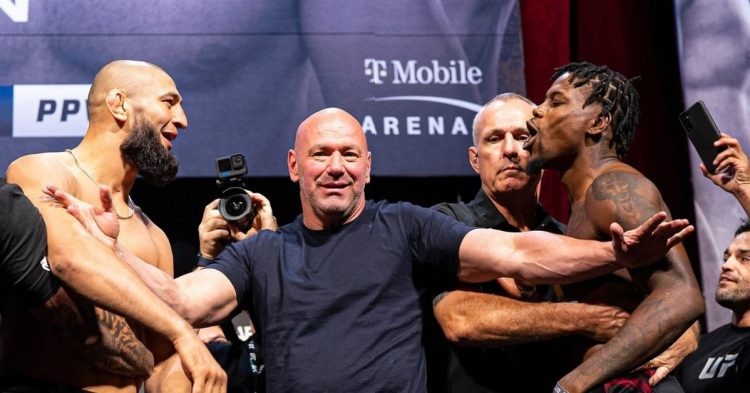 Kevin Holland gets a massive promotion in the UFC 279 fight card. He was originally set to fight Daniel Rodriguez on the main card of the PPV. But now, he will instead fight Khamzat Chimaev in the co-main event. The circumstances of how the bout came to be, remain one of the most fascinating stories in UFC history.

Khamzat was originally set to fight Nate Diaz in the main event of the night. But due to Khamzat missing weight by 7.5lbs, he was taken out of the fight. But the promotion did not axe him from the card and paired him up against Kevin Holland. The Trailblazer was set to fight Rodriguez at a catchweight of 180lbs. So it made sense for the UFC to book the fight.

The talking will be done in the Octagon tomorrow night…🤬 #UFC279 pic.twitter.com/qT1UEUVLwf

Ahead of the fight, there was a big backstage confrontation between The Borz and Holland. Obviously, there is a lot of bad blood between the two fighters. So it will definitely be a great co-main event fight. It is a 5-round fight on top of that. So it remains to be seen who adapts to the change of opponent better.

Chimaev vs Holland Fight Breakdown: Can Kevin Holland pull off an upset at UFC 279?

There are reports that Khamzat Chimaev was forced to stop cutting weight after doctors instructed him to. However, the reason why Chimaev was asked not to cut weight, is still unclear. So it has to be taken into consideration ahead of discussing how the fight may play out.

The biggest weakness in Kevin Holland’s game is his grappling. Because of it, he has suffered whenever he came across a dominant grappler. As a result, he has come down in weight to have a better chance at negating the threats of a takedown. However, this fight is at a catchweight and Chimaev is one of the best wrestlers in the UFC right now.

But the question is, will Khamzat use his superior ground skills? In his last fight against Burns, Khamzat took Burns down effortlessly. Instead of pursuing that, the 28-year-old was adamant about using his striking. The choice almost ended in a KO loss for him. If Chimaev tries to adopt the same approach against Holland, it may not end well.

Holland is a very powerful fighter who did quite well in middleweight with striking. Hence, it is imperative for Khamzat to use his grappling more. Holland has a takedown defence rate of 50%. On the other hand, Chimaev has a takedown average of 3.23 per fight with an accuracy rate of 100%. So it is hard to pick Holland against Khamzat this Saturday.