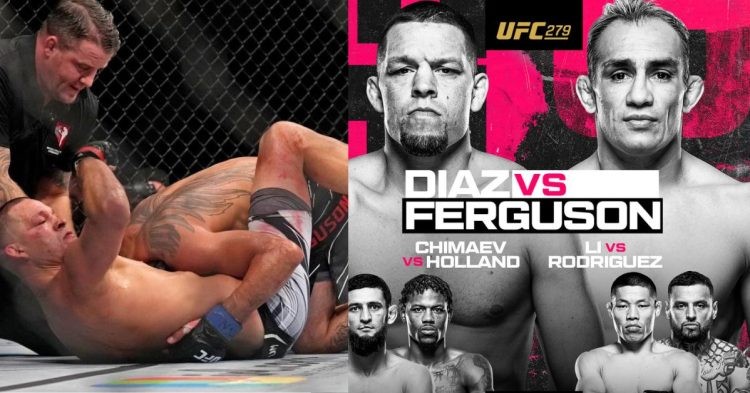 The main event of UFC 279 just got wrapped up and it has been an absolute banger with all the antics and chaos leading up to this main event. In one of the most surprising fight events, this card featured some of the best star power from the promotion with legends going on against each other.

UFC 279: Nate Diaz vs. Tony Ferguson has become the 25th consecutive sold-out event with an attendance of 19,125 and a total announced gate of $5,670,271. The main event featured Nate Diaz in his last fight in the UFC going up against Tony Ferguson after Khamzat Chimaev was given Kevin Holland as an opponent after his weight miss.

(they are calling it the 25th consecutive sell out)

The other major UFC PPV events from 2022 were also all sold out:

Two of the UFC’s greatest fan favorites, Diaz and Ferguson went up against each other in the main event. Heading into the last fight of his UFC contract, Nate won his last outing inside the octagon when he put Ferguson into a Guillotine and submits Tony for the first time.

This is his first victory since his decision win over former lightweight champion Anthony Pettis back in 2019. Diaz’s UFC record stands at 15-11. The fight purses has not been officially confirmed but Nate Diaz will make at least $750,00 for his fight against Ferguson while Tony might earn $616,000 from the UFC 279 Purse.

On the other hand, Ferguson is now 15-5 in the UFC and is also on a losing skid since 2019. Since his TKO win over Donald Cerrone that saw his win streak run to 12 straight fights, Ferguson went on to lose his next five including high-profile bouts against Justin Gaethje, Charles Oliveira, Beneil Dariush, Michael Chandler, and now Nate Diaz.

In the co-main event, the fans saw a 180-pound catchweight bout between Khamzat Chimaev and Kevin Holland. Once again Khamzat finished a fight in the first round without taking a single hit.

Chimaev was originally set to face Nate Diaz in the UFC 279 main event but later moved to a bout with Holland (who was originally scheduled to fight Daniel Rodriguez) after missing weight by 7.5 pounds at Friday’s official weigh-ins.

Meanwhile, Irene Aldana became the first fighter in UFC history to earn a victory by upkick to the body after stopping Macy Chiasson at UFC 279. In the last fight of the main card, Johnny Walker made a successful comeback after tapping out Ion Cutelaba with a nasty rear-naked choke in the first round.

The prelims also saw some of the most entertaining fights and some promising rising stars. Starting the first prelims bout, Julian Erosa defeated Hakeem Dawodu via a unanimous decision. Railton Almeida submitted Anton Turkalj via a rear naked choke in the first round.

A rising star in Norma Dumont got a decision victory over Danyelle Wolf. The same went for the promising prospect Alatengheili, who got a decision win over Chad Anheliger.

The ‘Performance of the Night’ winners from UFC 279 are: Nate Diaz, Irene Aldana, Johnny Walker, and Jailton Almeida. Each fighter took home a solid $50K bonus for their performance.