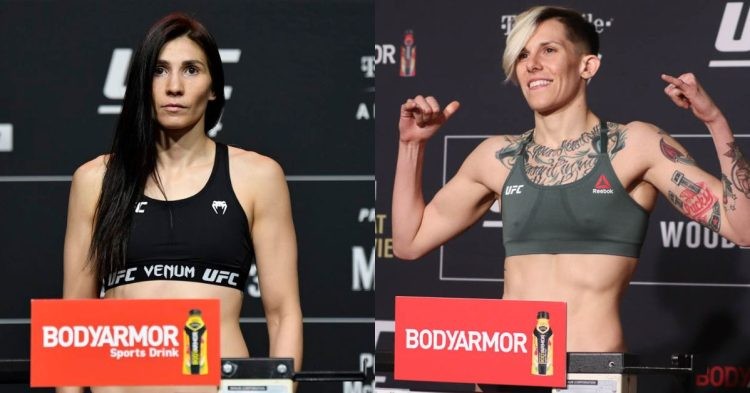 The highly anticipated UFC 279: Diaz vs Ferguson is all set to go down this weekend on September 10th at the T-Mobile Arena in Las Vegas. Apart from the big main event and co-main event fights, there are several matchups on the card that viewers should watch out for.

Continuing the exciting main card action! 👏@IreneAldana_ and Macy Chiasson face off tomorrow inside the Octagon.

One such fight is the women’s 140-pound catchweight bout between Irene Aldana and Macy Chiasson that will take place on the main card of UFC 279. This matchup was initially slated to take place in the 135-pound weight class. Surprisingly, both the fighters missed weight and consequently, this matchup is now fought at catchweight.

Aldana is making her return to the octagon after a lengthy one-year layoff. She picked up a terrific knockout win over Yana Kunitskaya in her last fight at UFC 264. On the other hand, Macy Chiasson barely edged past Norma Dumont via split decision in her last fight earlier this year.

With both the fighters winning their last fights, they will be riding high on confidence. As we move ahead let’s compare the stats of these two female bantamweights that will square off against each other at UFC 279.

Irene Aldana vs Macy Chiasson at UFC 279 is a classic striker v grappler matchup. Aldana is extremely promising on her feet with great boxing skills. So one can expect Irene Aldana to pick apart Macy with her striking skills. Because Chiasson has faced a lot of problems against strikers.

A good example is her fight against Raquel Pennington where she absorbed a lot of strikes and was submitted in the second round of that fight. The only way Chiasson can win this fight is by controlling Aldana on the ground every round and establishing her superiority.

The only concern for Irene Aldana would be her cardio as she has only fought twice in the last two years. She has good takedown defence and we can expect Irene to hold her ground against Macy Chiasson.

If Aldana closes the distance and approaches this fight aggressively then the size difference would not matter and the likelihood of her winning will increase significantly.