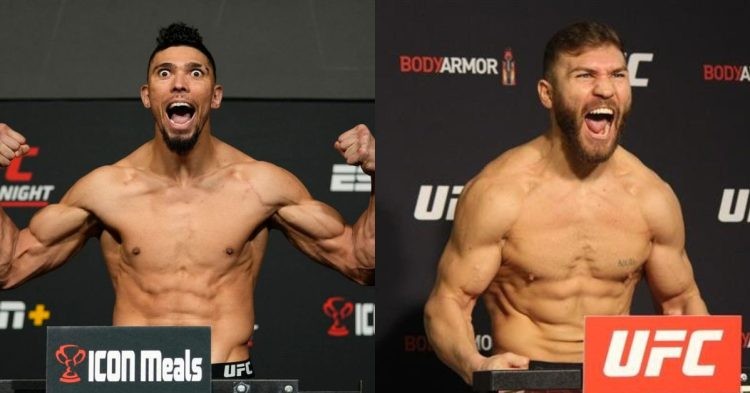 UFC 279: Chiamev vs Diaz is all set to go down this weekend on September 10th at the T-Mobile Arena in Las Vegas. This PPV features a mouthwatering light heavyweight clash between Johnny Walker and Ion Cutelaba that is scheduled for three rounds and will take place on the main card.

Leading into this matchup, Johnny Walker suffered a devastating first-round knockout loss to Jamahal Hill back in February this year. The 30-year-old light heavyweight contender is going through a sluggish form and is in a dire situation right now. So we can expect him to go out all guns blazing and make a big statement this weekend.

His opponent Ion Cutelaba is also going through a rough patch after losing four times in his last five fights. With that being said, there is a lot at stake for both the fighters as a loss would jeopardise their chances for a rise in the rankings.

As we move ahead, let’s compare the stats of the two light heavyweight contenders that will square off at UFC 279.

Johnny Walker will step inside the octagon at UFC 279 with a massive height and reach advantage over his opponent Ion Cutelaba. Stylistically, this is a classic striker vs wrestler matchup. Walker is someone who prefers to stand and bang. His physical advantage will help him significantly in striking exchanges as he can keep a safe distance and strike.

On the other hand, Cutelaba likes to take his opponents down and control them on the ground. So far, Walker has not done well against opponents with better grappling skills. If Cutelaba manages to keep the fight on the ground, then there is a possibility of him grinding out a decision win.

However, it is easier said than done and Walker’s ability to put his opponents to sleep at any given moment gives him an edge in this matchup. If this turns out to be an out-and-out striking battle, then Walker could end this fight early.