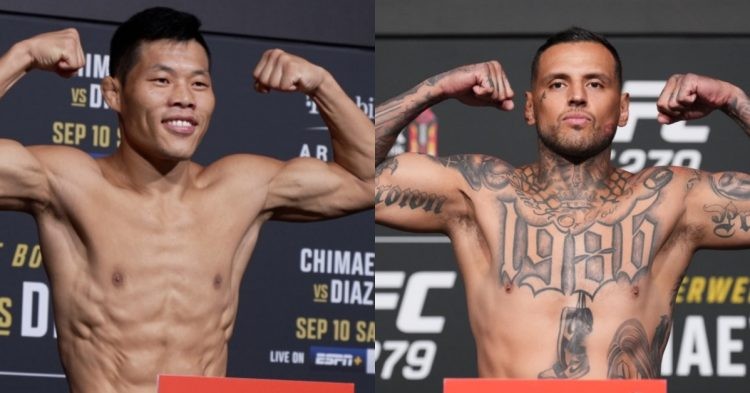 Li Jingliang will be back in action at UFC 279. Although he was originally scheduled to fight Tony Ferguson, it will not happen as Tony has been promoted to the main event against Nate Diaz. He will fight Daniel Rodriguez at the event at a catchweight.

Nicknamed The Leech, Li is a veteran in the company. He has fought the likes of Khamzat Chimaev, Neil Magny and Santiago Ponzinibbio. Although he is yet to break into the Top 10 of the division, Li has managed 11 wins in his 16-fight run in the UFC. In his last fight, Jingliang defeated Muslim Salikhov.

Daniel Rodriguez has had 7 fights in the UFC already since joining the company in 2020. He is coming off 3 back to back wins in his last three bouts. Rodriguez’s last fight was against Kevin Lee in August of 2021. So he is coming back after a long layoff, which may affect his performance against Li.

Li Jingliang is not a one-dimensional fighter. As well as being an excellent striker, the Chinese fighter mixes in takedowns quite well. He lands at a rate of 4.39 strikes and absorbs 3.66 strikes per minute. The 34-year-old has a takedown average of 1.27 per fight. But his grappling skills will not be tested against Daniel Rodriguez, who is a slugger.

Rodriguez lands 8.06 strikes while absorbing 5.38 per minute. Two of his 3 finishes in the UFC have come via knockout. But Li does not shy away from getting in a brawl either. Although Li’s number of strikes per minute seems less in comparison, every single strike thrown by Jingliang is with the intention of getting a knockout.

Both fighters will be happy to keep the bout on their feet. So there remains a high possibility of seeing a knockout. The Leech has 10 KO finishes in his career. Both Daniel and Li have great chins as neither of them have been knocked out in their respective careers. So it promises to be a very entertaining bout.

It will be an interesting fight due to the stylistic match-up. While Daniel is more of a volume puncher, Jingliang is always looking for a finish. Rodriguez will have to keep Li at a safe distance where the latter can not land anything meaningful. Otherwise, Li Jingliang may hand the 35-year-old his first KO loss.

But Daniel Rodriguez will be the smart pick to win this Saturday. He has been in better form lately and is the much bigger fighter.