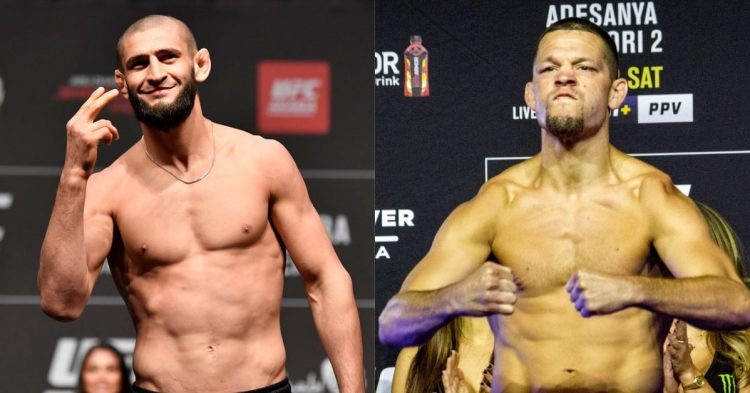 UFC 279 is knocking on the door and it has a massive fight in the headlining spot. Khamzat Chimaev, the fastest rising star in the UFC, will fight Nate Diaz. The bout will mark the end of Diaz’s 15-year career in the UFC. He felt disrespected by how the company handled him. So Nate would definitely try to win on his way out of the company.

Khamzat Chimaev is coming off an excellent fight against Gilbert Burns at UFC 273. After 4 extraordinary wins to start off his UFC career, Chimaev had a hard fight against Burns. Unlike his other opponents, Gilbert did not go down easy and caused Chimaev a lot of problems. After 3 rounds, Khamzat got the win via unanimous decision and maintained his undefeated record.

Nate Diaz, on the other hand, is coming off a loss against the current champ Leon Edwards. But he nearly beat Edwards in the final few moments of the fight with a well-timed hook. However, Edwards managed to survive and beat Nate via the judges’ decision.

So how do Nate Diaz and Khamzat Chimaev match up against each other? Let’s find out.

Although Nate Diaz is an exceptional fighter and a veteran of the sport, this has the potential to be Khamzat Chimaev’s easiest fight in the UFC to date. Nate has not won a fight since beating Anthony Pettis in the co-main event of UFC 241. Since then, he was mauled by Jorge Masvidal and Leon Edwards at UFC 244 and UFC 263 respectively.

Nate Diaz becomes more and more dangerous as the fights go on. But Khamzat does not like dragging the fights to the latter rounds. Instead, he aims for a finish from the moment the bell rings. Chimaev has an average of landing 7.89 strikes per minute. It just shows that Khamzat will try to smother Nate very early on.

But not just striking, Chimaev is a double threat who also brings in a high level of grappling. He averages 3.23 takedowns per fight and attempts 2.7 submission holds. So Chimaev is not going to give Nate any room for a breather. However, Nate Diaz is famously hard to finish. So the bout will most likely go to the latter rounds.

Nate’s boxing is amongst the best in the promotion. He manages to overwhelm fighters with his volume punching in the latter rounds. Nate lands 4.51 strikes per minute while absorbing 3.73 strikes at the same time. Although he averages 1.10 takedowns per fight, Nate will not be looking to go for takedowns on Chimaev.

The game plan for both fighters is very clear. While The Borz will be trying to put Nate under pressure from very early on. If he keeps Nate on the back foot and does not allow the 37-year-old to open up, Khamzat should win without any doubt. But if he gets overzealous as he did against Gilbert, Nate may pull off the biggest upset in UFC history.