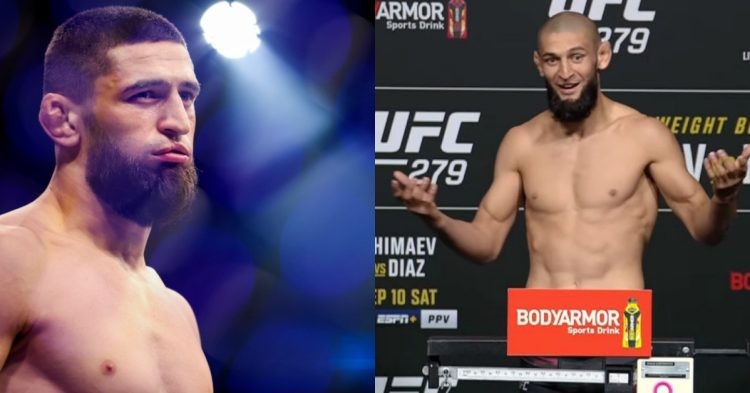 The UFC 279 main event just got a lot more interesting! Khamzat Chimaev vs Nate Diaz seems like a very one-sided fight on paper. It looks like it is going to be even more so following the official weigh-ins for the event. Chimaev weighed in at 178.5lbs for the main event, while Nate weighed in at 171lbs.

Missing weight on the scales is nothing new for the fighters. Most recently, Charles Oliveira missed weight by 0.5lbs at UFC 274. As a result, he lost the belt.

In 2021, Paulo Costa’s bout against Marvin Vettori was moved from middleweight to light heavyweight as Costa did not want to cut the weight. But, in all fairness to Paulo, he had the decency to let everybody know of his situation.

But The Borz‘s disastrous attempt to weigh in will certainly go down as one of the worst possible moments in UFC history. Missing weight is one thing, but missing it by almost 8lbs is truly embarrassing.

However, there is no word on whether the bout will be cancelled or not. Usually, when a fighter misses weight, their opponent receives 20% of the purse. But, this is truly unprecedented and it remains to be seen what happens next.

Will Nate Diaz accept a catchweight fight against Khamzat Chimaev at UFC 279?

The weight miss is very significant in a lot of aspects. From Nate’s point of view, the fight just became basically unwinnable. Although he has one more hour after the scheduled time period to make the weight, it is impossible for him to make the weight. Chimaev already had the size advantage. But his missing weight by 8lbs means, Nate will be even more of an underdog.

I’m just saying, no inside info on this, but if I know anything about Nate Diaz, you can throw the idea of a catchweight tomorrow out the window right now. Again, that’s not from him. But I don’t see a world in which he agrees to that.

ESPN journalist Brett Okamoto pointed out that the chances of Nate accepting the fight are slim to none. So the main event of UFC 279 seems to be in big jeopardy. After the whole fiasco between Khamzat and Nate, it will be a shame to see the fight not happening now. But Tony Ferguson is right there as he is fighting Li Jingliang in the co-main event.

One has to feel bad for Nate. This was set to be his last UFC fight. Hence, no one will blame if the 37-year-old refuses to fight an overweight opponent.

So it will be very interesting to see whether the UFC books that fight as the main event or axes Khamzat Chimaev from the PPV altogether. The Tony Ferguson option looks really appealing right now.