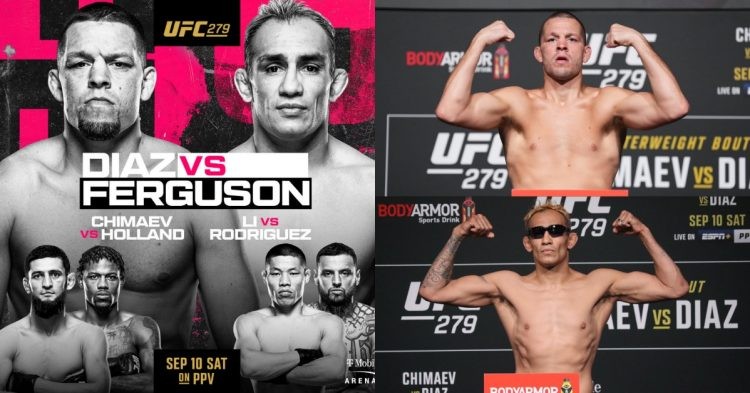 UFC 279 just went through a massive change as almost all the major fights have been moved around. The most significant change is to the main event. Instead of Khamzat Chimaev, Nate Diaz will now fight Tony Ferguson on September 10th. Both are veteran fighters and it is going to be a very evenly matched contest between two elite fighters.

Both Nate Diaz and Tony Ferguson will have a tough time adjusting to the fight. While Nate was preparing for Chimaev, Tony was also in camp to fight Li Jingliang. So the last-minute change of opponent will affect both fighters. But, being the professional that they are, both Diaz and Ferguson will give it their all to put on a spectacular fight for the fans.

The main event we didn’t know we needed 👏@NateDiaz209 vs @TonyFergusonXT is closing tomorrow’s show!

Ferguson is on the worst run of his life as he has lost all 4 of his last bouts. After the recent failure at lightweight, Tony is making the move to welterweight to turn his career around. Nate, on the other hand, is looking to exit the company after this fight. So let’s look at the stats to see how this important fight may play out this Saturday.

Diaz vs Ferguson Fight Breakdown: Who is the favourite to win at UFC 279?

One of the most interesting aspects of the bout will be the difference in cardio for both fighters. Nate Diaz was in camp for several weeks preparing for a 25-minute bout. But Tony’s fight against Li was a 3-rounder. Hence, Tony’s team wanted the fight to be for 3 rounds. But the company ultimately decided to make it a 5 round affair.

But, as the fans know, El Cucuy is famous for his cardio. So it should not be a big issue for him to fight Nate in a 25-minute war. On top of that, both have an excellent ground game. While Tony is explosive on the mat, Nate is more of a technician. So it will be very interesting to see who gets the upper hand while grappling. But, in terms of striking, Tony is a whole other animal as opposed to Nate.

The 38-year-old lands 5.12 strikes per minute and it includes both punches and kicks. Although Nate lands 4.51 strikes, most of those are punches as Nate is not really a kicker. If the fight plays out on the feet, Tony will certainly dominate. But one thing that Ferguson can not do against Nate, is rush in without caution. He suffered a brutal KO loss to Michael Chandler at UFC 274.

The fans have seen Nate rock Leon Edwards at UFC 263. So Tony will have to be a lot more careful about pressing Diaz. But, he will have an advantage in all other aspects of the fight. So the smart money will be on the former UFC interim champ to win this weekend. Although it will be hard to finish Nate Diaz, Tony’s skills may just overwhelm the 37-year-old over a course of 5 rounds.