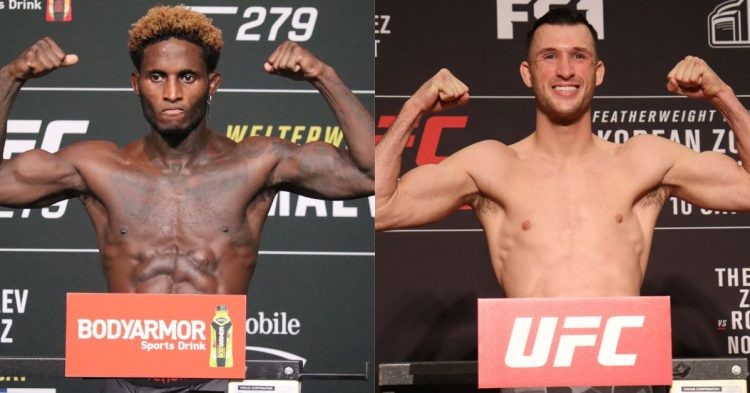 UFC 279: Chimaev vs Diaz will begin with it’s proceedings this weekend on September 10th at the T-Mobile Arena in Las Vegas. This PPV features several exciting matchups that will keep the viewers entertained throughout the weekend.

Hakeem Dawodu will be back in action as he takes on Julian Erosa in a three round catchweight bout that will take place on the main event of the prelims. Initially, this bout was scheduled at the 145-pound weight class. However, this bout was shifted to catchweight after Hakeem missed weight by 3.5 pounds.

Consequently, a portion of his fight purse will go to his opponent Erosa and only time will tell whether missing weight has an effect in impacting the outcome of this matchup. As we move ahead, let’s compare the stats of the two fighters that will clash at UFC 279.

Hakeem Dawodu’s rise in the UFC has been remarkable as the featherweight contender went on a five fight winning streak. However, Movsar Evloev stopped Dawodu’s run by completely outclassing him throughout the three rounds.

Following a tough loss, Mean bounced back and picked up a dominating win over Michael Trizanu in his last fight. On the other hand, Julian Erosa’s has delivered inconsistent performances and has not made a significant jump in the featherweight division.

This is a great opportunity for Erosa to make a mark in the 145-pound division with a win over a tough contender like Hakeem. Going into this matchup, Juicy J has a significant edge in terms of height and reach over Hakeem Dawodu. However, the key to victory for Erosa will be his takedown skills against Mean.

Hakeem struggled a lot against Evloev while defending takedowns and it is needless to say that Julian would take note of this weakness and attempt to take the fight to the ground. If we compare the two fighters, Hakeem is a much better striker than Erosa. Hence it is likely that Dawodu will look to attack Julian Erosa with his striking from the minute go.

The biggest problem for Juicy J is that he tends to absorb a lot of blows and he cannot afford do that against Dawodu as he has the power to shut the lights out. Despite being the shorter fighter, Hakeem has the tools to get the job done at UFC 279. If Mean manages to defend takedowns then the likelihood of him winning this matchup increases significantly.