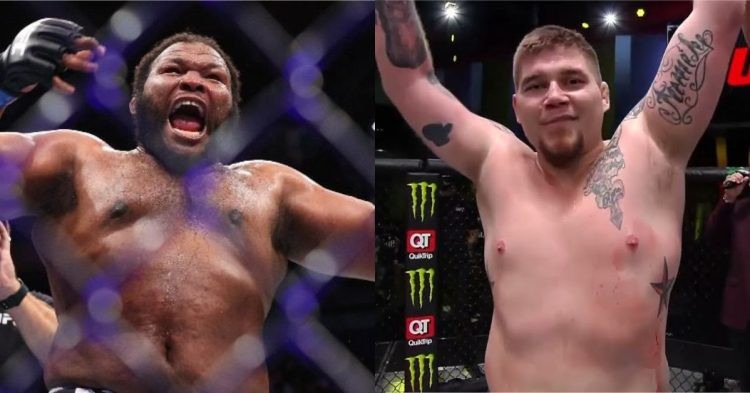 The preliminary card of UFC 279 will feature a heavyweight clash between Jake Collier and Chris Barnett. This is an electrifying matchup as we will get to see the very entertaining Barnett stepping up against a powerful fighter in Collier.

Jake Collier is 13-7 and made his UFC debut back in 2014. Since then, he has been on a back-and-forth win-and-loss skid. He started his career as a promising middleweight but then settled in the heavyweight division.

On the other hand, Chris Barnett has a record of 22-8 as a professional mixed martial artist. Chris has made quite the splash since joining the promotion. He faced Ben Rothwell in 2021 on short notice but got caught in his guillotine in the second round. However, he rebounded with one of the most memorable knockouts against Villante.

Even though Jake Collier doesn’t have any spectacular victories like his opponent, he surely has the experience. He fought Tom Aspinall back in 2020 but lost, unfortunately. He rebounded with a unanimous decision over Gian Villante but then again lost a split one to Carlos Felipe.

Jake fought two times this year and even though he won against Chase Sherman via submission, in the next fight he came up short against Andrei Arlovski and lost via split decision.

Collier is a solid striker with good technique but he has yet to show some impressive wins. He hits hard and good with his hands. The most important aspect of his game is his boxing. However, Collier is not known for his ground game but he still has the chance against Chris on paper.

On the other hand, Chris Barnett is currently one of the most entertaining rising heavyweights in the promotion. He showed his heart when he fought Ben Rothwell on short notice. Unfortunately for him, he lost the bout via guillotine in the second round.

Barnett pulled out one of the most surprising and all-time highlight knockouts against Villante by a spinning wheel kick to break the internet. Despite being a heavyweight, he is very athletic and probably the most unpredictable fighter in the division.

However, Barnett is not the best fighter when it comes to technique, and that doesn’t bother him too much as he relies on his unpredictable nature to set up for explosive shots. He is fairly good on his feet but needs to work on his ground game against Jake.

To put it in simpler terms, Collier has a better chance of winning this fight if he manages to avoid getting caught with any unlucky shots. He has better boxing and his wrestling is fairly better than Chris too. He also happens to be the more experienced fighter.

Meanwhile, Chris will get in trouble if the fight goes to the ground or if he can’t manage to find an early victory. He will rely on his footwork and movements for his defense and due to his unpredictable nature on his feet; he can get lucky if he sets up for some big shot that Jake won’t see.