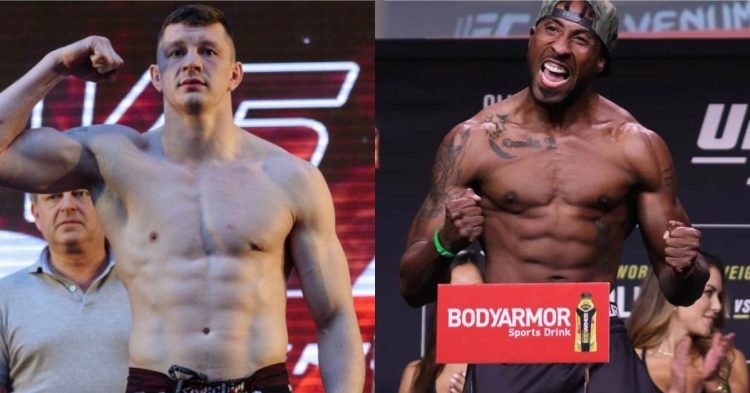 UFC 279 will feature a middleweight fight between Jamie Pickett and Denis Tiuliulin, under the preliminary card of UFC 279 that will take place on September 10th at the T-Mobile Arena in Las Vegas.

Going into the fight, Pickett is the betting favorite against Denis who is the betting underdog as he is still looking for his first victory inside the octagon.

Jamie Pickett will look to rebound after coming off a submission loss in his last fight against Kyle Daukaus in February. He has two victories in the promotion over Laureano Staropoli and Joseph Holmes.

Like his opponent, Denis Tiuliulin also came off a submission loss against Aliaskhab Khizriev in his UFC debut. This bout will feature two rising middleweights who are very similar in style and skill set.

Pickett has suffered four defeats but won two straight decisions before being submitted. However, Pickett has the reach advantage over his opponent and still getting better with his skills.

He has decent power but if the fight gets into later rounds he gasses out. Also, he has shown holes in his game against pressure fighters and often gets overwhelmed by relentless fighters. Nonetheless, he has slightly more experience than Denis in the octagon.

Pickett has a better chance of winning this fight if he uses his clinch and powerful strikes to subdue his opponent. He usually wins by scoring combinations but if he gets trapped against the cage, it might get worse for him.

On the other hand, Denis will look for his first win in the UFC after losing his debut in the promotion. However, he took this fight on short notice against Aliaskhab Khizriev.

Before his debut defeat, the Russian fighter was 10-5. But he now hopes to get in the win column after he finds the first win in his UFC career. Denis has got some serious stoppage power and that saw him win four fights by stoppage in his five bouts before making his UFC debut.

Despite his early loss in the UFC, Tiuliulin has decent striking and is known for his power. The Russian has eight of nine wins by knockout. He is also capable of taking on strong fighters and often stops fights in early rounds.

Both of these fighters are of similar height and age at 34 years. Also, both own eight knockout wins on their professional resume. This is a fight that will feature two similar fighters on paper.

Jamie Pickett already has two victories under the promotion. However, despite this, Denis Tiuliulin has some impressive stoppage wins and a better skill set overall. Jamie lacks the conditioning and technique and is simply not so versatile against Tiuliulin.

In conclusion, Tiuliulin has better chances in this fight and even though he has yet to pick up his first win in the UFC, he has more versatility and techniques to win this fight being the underdog.