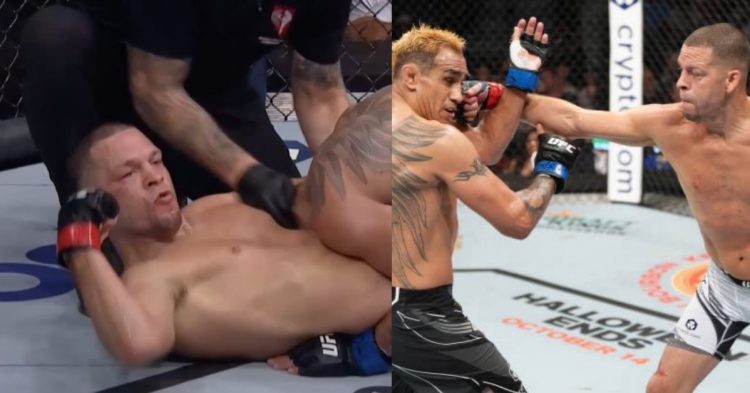 Nate Diaz took on Tony Ferguson in the main event of UFC 279. Although Nate was originally supposed to fight Khamzat Chimaev, he instead fought Tony as Khamzat missed the agreed-upon weight. So how did the main event fight go? Let’s find out.

As expected Tony went after Nate Diaz right away. Although Diaz attempted a kick in the opening moments of the fight and Tony caught it and took Nate down. However, Tony did not follow him to the ground and allowed Nate to get up. Diaz also checked a kick from Tony which opened up a cut on Tony’s leg. Nate also displayed good head movement as he dodged some of his Tony’s punches.

But El Cucuy did find a way through Nate’s guard and landed a big punch in the closing minute of round 1. Although the pace of the fight was not as fast as Tony’s usual fights, both fighters landed a good deal of strikes throughout round 2. Tony was definitely landing on Nate, but Diaz seemed to be having some success in finding Tony’s chin too. The 37-year-old also busted Tony’s face in the round.

Two rounds in the books. Tony is wearing some damage 👀 #UFC279 pic.twitter.com/rr7bj3ofri

The cut from the first round on his leg seemed to be bothering Tony. So he started to get desperate at the beginning of round 3. Tony tried to blitz in and land some big strikes on Nate. It worked to an extent as some big kicks and punches from Ferguson seemingly hurt Nate. But, as the round went on, Nate started to land a lot more and ended the third round on a high note.

As the championship rounds kicked in, both fighters had to do a lot more to really stamp their authority on the fight. Nate started off round 4 with some stiff punches on Ferguson. But it did not slow Tony down as he kept on kicking despite a cut on his leg. But Diaz found his momentum and started stringing together a lot of great combinations.

Tony buckled under the pressure and shot for a takedown. But it proved to be fatal as Nate locked in a guillotine and submitted Tony to end the fight! It was only the second submission loss of Ferguson’s career, the first one in the UFC.

Two veterans went at it in the main event of a big PPV. They put up a great show for the fans and It was a great way for Nate to end his run in the UFC. He hinted that he will get into boxing after this with a possible Jake Paul fight on the horizon. But Diaz also stated that he will come back to the UFC after that and chase after a title in the promotion.

“If I Die, I Die in the Cage”- Khamzat Chimaev Responds to Criticism After Missing Weight, Calls Himself the Most Dangerous Fighter in UFC After Finishing Kevin Holland at UFC 279