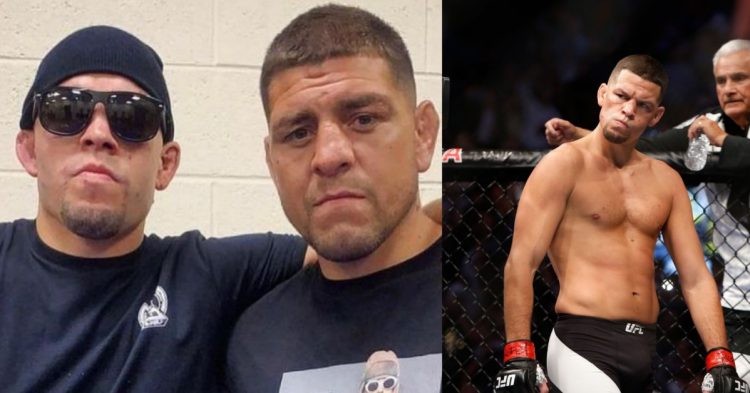 An era is coming to an end at UFC 279. Diaz brothers, both Nate and Nick Diaz, have played a huge role in making the UFC as popular as it is currently. But it looks like their association with the company is set to end this weekend.

Nate Diaz will take on Khamzat Chimaev this Saturday in the upcoming PPV. By the looks of it, it is set to be the last time he enters the Octagon after a career of 15 years.

Ahead of the bout, fans are wondering whether Nick Diaz will be in Nate’s corner for such a big occasion or not. Nate’s introduction to MMA was through his older brother Nick. Over the years, Nate has outgrown his brother’s shadow and has become one of the most well-known figures in the combat sports world.

But Nate has not allowed the fame to get to his head and has always given a shoutout to his brother Nick Diaz and his team. However, Nick has not been seen at Nate’s corner for a long period of time. It does not look like it will change this time around either.

Nick has trained with Nate to help him prepare for Chimaev, as evident by a photo posted on his Twitter account. He was also a presence during Nate’s last fight against Leon Edwards at UFC 263. But he did not appear on the corner during the bout. But it is likely that Nick appears in the crowd to support his brother this weekend.

It also has to be mentioned that Nate was not there in Nick’s corner for his return fight at UFC 266 against Robbie Lawler.

Nick Diaz came back after an absence of 6 years to fight Robbie Lawler in 2021. But it did not go too well for him as he basically gave up in the third round of the fight. But there was interest in seeing Nick back in the cage one more time. His coach stated that Nick could possibly return to fighting in 2022. But, with only a handful of months left in the year, it looks unlikely.

Even Nick himself was open to having another go inside the Octagon. But, there was a condition for it. He wanted to fight then-champion Kamaru Usman for the belt. However, Usman is the not champ anymore and the title scenario is pretty muddy currently. The new champ Leon Edwards confirmed that Usman will get the next title shot.

But Khamzat Chimaev is also on the rise and his coach stated they are expecting a title shot with a win over Nate at UFC 279. So it seems like the days of seeing a Diaz brother in action are truly over!