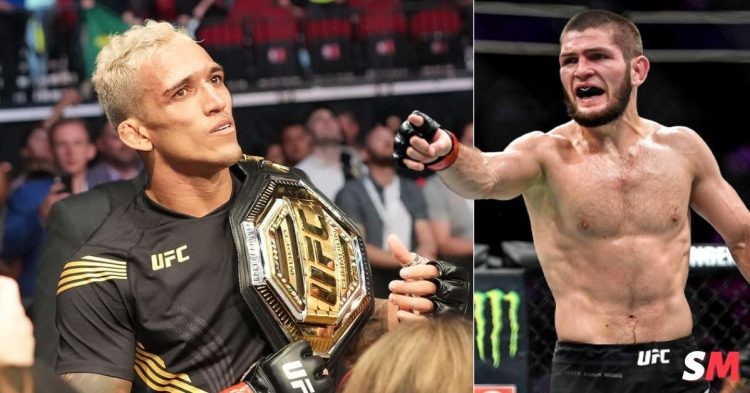 “This is what Islam gonna do with Charles Olivera: he gonna ride him like you ride your horse.” Nurmagomedov was seen telling Henry Cejudo during the pre-fight talk at his fight promotion Eagle FC.

Islam Makhachev, who boasts of a dominant ground game owing to his wrestling and grappling credentials is widely touted to be the “next Khabib Nurmagomedov.” The former lightweight champion did not stop here as he went on to claim Oliveira tapped 8 times in his UFC career and possibly doesn’t deserve to be credited for his ground game.

And now, fans of Charles Oliveira and MMA fans alike have flocked in numbers to give Nurmagomedov a harsh reality check.

How many times has Charles Oliveira been submitted in the UFC?

Fans were quick to remind Khabib Nurmagomedov of Olievria’s incredible feat, while also giving him a fact check on how many times Do Bronx has been submitted inside the Octagon. The answer is three, and not eight as Nurmagomedov claimed.

He’s tapped 3 times (Miller, Pettis, Lamas). He also holds the record for the most submissions wins in the history of UFC. https://t.co/YNEHVlsG7v

Charles Oliveira suffered the first submission loss of his career against Jim Miller back at UFC 124 way back in 2010. Do Bronx also dropped back-to-back losses against Ricardo Lamas and Anthony Pettis via guillotine choke at UFC on FOX 21 and UFC Fight Night 98 respectively.

The complete lack of respect for Olivera tells me everything I need to know about Khabib and his team.

Do Bronx has the same number of tap outs as Khabib has title defenses.

While Nurmagomedov claimed Oliveira tapped eight times, it is truly the number of losses in his UFC career. In 42 professional fights, Oliveira has only lost eight times in his tenured mixed martial arts career. Since the loss to Paul Felder, Oliveira has raked in eleven straight wins, finishing each of his opponents except Tony Ferguson.