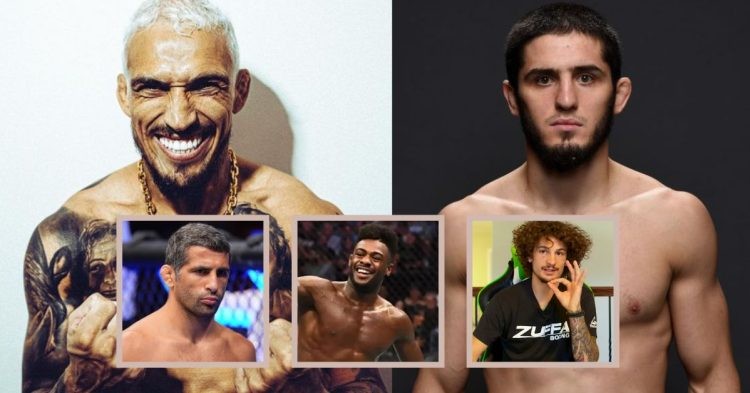 UFC 280 is right around the corner and fans are still wondering who will get their hand raised when Charles Oliveira steps inside the Octagon to take on Islam Makhachev for the vacant lightweight title. Arguably one of the most neck-to-neck fights in the history of the lightweight division owing to the fighting style of both the fighters, fans and fighters alike are divided as to who gets the job done this weekend at UFC 280 in Abu Dhabi.

Let’s take a look at what some of the fighters competing on the same card, including Mateusz Gamrot, Beneil Dariush, Sean O’Malley, and Belal Muhammad among others have to say about the much-anticipated showdown.

Mateusz Gamrot, who will be competing against Beneil Dariush is favoring Islam Makhachev to beat Charles Oliveira this weekend. Gamrot believes if Makhachev can avoid “stupid” mistakes, he should comfortably cruise past the Brazilian fighter.

However, he doesn’t believe the fight will end with a knockout or submission and is leasing towards a decision win for the Dagestani fighter.

Aljamain Sterling: The UFC Bantamweight Champion, who takes on TJ Dillashaw in his second title defense of the 135-pound gold is picking Charles Oliveira to get the job done this weekend at UFC 280. Sterling believes Oliveira’s ground game activity off of his back and on top could prove to be too much for Makhachev. Moreoever, he believes he is a “terminator” on the feet with his knees and elbows and is confident that Oliveira’s ability to be dangerous everywhere the fight goes could be the key to winning against Islam Makhachev.

Beneil Dariush: UFC lightweight contender feels that Oliveira is 100% offensive. However, the question for Makhchev would be whether he can take Oliveira. While he believes an aggressive Do Bronx could make things trickier for Makhachev, Dariush is still leaning towards Islam to beat Oliveira “by a hair”.

Alexander Volkanovski: The UFC featherweight champion is quite confident that Islam Makhachev will beat Charles Oliveira. Volkanovski has even admitted he has trained harder for Makhachev should the opportunity arise, and while he wants to face Oliveira considering UFC President Dana White has already confirmed he is next for the winner of Oliveira vs Makhachev, he feels that Islam will get his hand raised at UFC 280.

Belal Muhammad: UFC Welterweight is confident the fight is “for sure” going to the ground. Muhammad is also leaning towards Islam Makhachev owing to the fact that “Dagestani wrestling” and “Dagestani BJJ” are completely different and that could be the key to beating Charles Oliveira at UFC 280.

Sean O’Malley: Surging bantamweight contender O’Malley wishes Charles Oliveira submits Islam Makhachev. While he expects a finish, O’Malley is not too sure what goes down at UFC 280.

Who do you think gets his hand raised this weekend at UFC 280: Charles Oliveira vs Islam Makhachev for the vacant lightweight gold? Do let us know in the comments section.