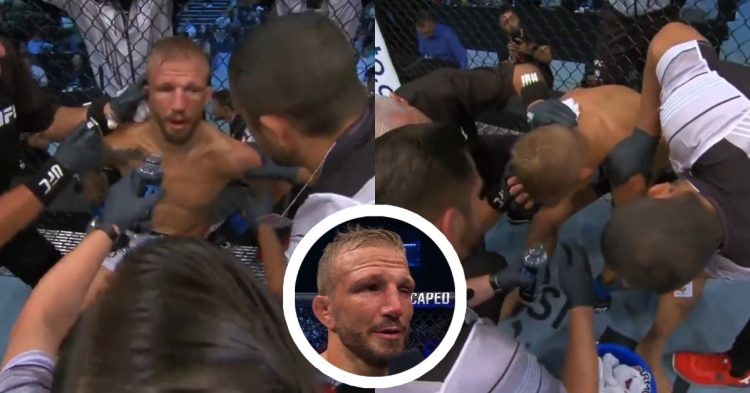 Aljamain Sterling vs TJ Dillashaw was the co-main event of an insanely entertaining event, UFC 280. The fight came to be after Sterling called out the former champ after beating Petr Yan at UFC 276. Aljo has taken jabs at Dillashaw for the latter’s history of testing positive for prohibited substances. TJ did not keep quiet as he also fired back at Aljo at the pre-fight press conference.

Coming into the fight, TJ Dillashaw had a really tough contest against Cory Sandhagen in 2021. Some fans even questioned if Dillashaw really won the contest or not. But, two of the three judges scored the bout in favour of the 36-year-old. However, he was making a comeback after two years outside the cage. So fans had the expectations to see a much improved TJ.

But the job to regain his title was not going to be an easy one. Aljamain Sterling shut up a lot of his distractors with the way he handled Petr Yan in their rematch. It just showed how capable Aljo was in the face of unimaginable pressure. So did Sterling retain his UFC belt inside the Etihad Arena in Abu Dhabi? Let’s find out!

As soon as the fight started, Aljamain Sterling shot for a takedown right away! He tripped TJ Dillashaw moments into the fight. But as soon as TJ hit the ground, his left shoulder came out of the socket. Usually, after such a bad injury, fighters do not continue fighting. But Dillashaw showed an incredible amount of heart and survived the first round.

After the end of the initial round, TJ’s corner popped the shoulder back in its place. But that did not last for long as the shoulder came out of the socket right away in the second round. But this time around, the ref stopped the fight. Following the stoppage, TJ revealed that he told the ref backstage that his shoulder was already injured heading into the fight. He also apologised for holding up the division.

“It popped out right away. I gotta apologise to the weight class, (I) kinda held it up. I completely blew my shoulder out at the end of April as soon as I started to get ready for this. And I probably dislocated it a good 20 times throughout the training camp. This is by far the toughest training camp I’ve been through because of that, emotionally.”

“Like I said, I apologise to the weight class. Cause It’s a stacked weight class man, I took up a position, but I wasn’t gonna wait another year to get a shot.”

TJ Dillashaw was looked down upon by many fans because of his doping scandal. However, his incredible show of grit will earn him a lot of respect from the MMA community. As one can imagine, how painful it must have been to endure strikes on a separated shoulder. Although he lost, TJ’s heroics at UFC 280 will go down as one of the most memorable moments in the sport’s history.